The United Nations mission in South Sudan today confirmed reports of “intense small arms fire and shelling” close to its base in Renk, Upper Nile state, where some of the 93,000 civilians sheltered by UN peacekeepers throughout the country are staying.

“The Mission continues to call on all parties to respect the work and inviolability of UN premises and protection of civilian sites,” a UN spokesperson told journalists in New York.

Also in the Upper Nile, a UN patrol yesterday in Baliet observed that “most houses, as well as a hospital, have been destroyed and looted”, the spokesperson added.

The UN Humanitarian Coordinator in the country, Toby Lanzer, raised concerns about civilian protection in meetings with Government and security officials this week in Unity state.

Mr. Lanzer also visited a hospital in the town of Leer, and met with community representatives and humanitarian partners.

“Much of the town, including the market and hospital, has been looted and destroyed,” he said. The senior UN official was also told of alleged accounts of sexual and gender-based violence.

Meanwhile, the UN World Food Programme (WFP) is continuing to airlift food assistance to hundreds of thousands of people to avoid “a hunger catastrophe” in areas isolated by the conflict, spokesperson Elisabeth Byrs said.

“The number of severely food insecure people has risen to nearly 1.3 million persons, an increase of 200,000 since January,” Ms. Byrs briefed reporters in Geneva.

The situation is most dire in the three conflict-affected states of Jonglei, Upper Nile, and Unity, where three-quarters of the population is currently food insecure – a figure that was likely to rise to 85 per cent in the next three months.

“The situation is worrying and concerning, but it could be avoided if we had access,” urged Ms. Byrs. “WFP appealed to all parties taking part in the conflict to facilitate unimpeded access before conditions deteriorated further.”

The UN agency has appealed for $475 million until the end of the year to counter enormous logistic challenges during the rainy season.

In addition, Ms. Byrs said that a convoy of barges carrying 1,200 metric tons of food had been sent from Juba and would sail to Malaka on 9 June. 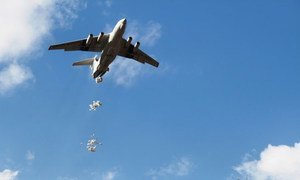 As the rainy season begins in South Sudan, the United Nations Food and Agriculture Organization (FAO) has scaled up its emergency response operations with large-scale airdrops to provide remote communities with livelihood kits that will allow them to plant crops, fish waterways and protect livestock from fatal diseases.