IRIN/Erica Silverman
A Palestinian released in an exchange of prisoners by Israel and Hamas reaches welcoming festivities in Gaza City on 18 October 2011.
6 June 2014

Secretary-General Ban Ki-moon voiced concern today about reports regarding the deteriorating health of Palestinian administrative detainees who have been on hunger strike for over a month.

“He reiterates his long-standing position that administrative detainees should be charged or released without delay,” Mr. Ban’s spokesperson said in a statement.

The Secretary-General’s concerns on these issues were recently reiterated to the Israeli Government by UN High Commissioner for Human Rights Navi Pillay.

The High Commissioner also expressed concerns regarding a legislative amendment before the Israeli Knesset, or parliament, which would permit force-feeding and medical treatment of prisoners on hunger strike against their will under certain conditions, in contravention of international standards.

“The Secretary-General has taken note of the related concerns raised recently by various human rights organizations and has responded, reiterating the United Nations well known positions,” said his spokesperson.

Yesterday, members of a UN committee urged Israel to end the practice of administrative detention and heed the “desperate plea” of prisoners to be told what they are accused of so they can mount a defence.

“It is a desperate plea by these detainees to be afforded a very basic standard of due process: to know what they are accused of and to be able to defend themselves,” the UN Special Committee to Investigate Israeli Practices Affecting the Human Rights of the Palestinian People and Other Arabs of the Occupied Territories said in a press release.

According to the Committee, a first group of around 100 Palestinian administrative detainees launched a peaceful protest on 24 April 2014 and were later joined by more detainees. The total number of hunger strikers now stands at 290, with more expected to join in the coming weeks. 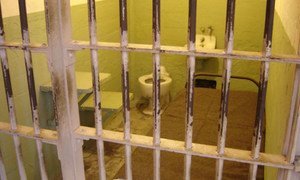 Gravely concerned about the reported worsening health of more than 75 Palestinian detainees on hunger strike now in hospital protesting Israel’s continued use of administrative detention, members of a United Nations committee today urged Israel to end the practice and heed the “desperate plea” prisoners to be told what they are accused of so they can mount a defence.