IRIN/Mujahid Safodien
Testing and treating adolescents is becoming a critical part of Lesotho’s campaign to fight the third highest HIV prevalence in the world.
6 June 2014

Despite significant gains, the HIV/AIDS epidemic is far from over, United Nations officials said today, calling for greater political commitment, investment and innovation to end the global scourge.

“Having put forward so much investment and effort by all stakeholders – and with so many lives still on the line – it is a moral imperative to seize the opportunity of getting the job done,” John Ashe, President of the General Assembly, told the 193-member body’s annual review of progress in tackling HIV/AIDS.

“With continued political commitment, investment and innovation, we can make great strides toward ending AIDS and take a giant step toward creating a healthier and more prosperous human family, living on a sustainable planet.”

In his latest report on the issue, Secretary-General Ban Ki-moon outlines progress achieved in the 10 target areas designed to halt and reverse the spread of HIV and AIDS by the end of 2015, as set out three years ago by world leaders in the 2011 Political Declaration.

“The report sends a clear message,” said Mr. Ashe. “The global solidarity and joint efforts of the international community are yielding significant gains against the epidemic, and bringing about an historic opportunity to lay the foundation for ending AIDS.

“However, AIDS will remain a global challenge beyond 2015, and sustained commitment and efforts will be required if we are indeed to defeat this scourge,” he added.

He noted in particular that the number of new HIV infections is still unacceptably high, at 2.3 million in 2012. Also, more than half of people in need of anti-retroviral treatment do not have access to it – with a glaring gap in access to paediatric treatment.

In his remarks, the Secretary-General said that the world is making “solid headway” in meeting some of the targets and commitments from the 2011 Political Declaration, such as expanding treatment access, eliminating HIV infections among children and keeping their mothers alive, and mobilizing resources.

In addition, more countries are making specific efforts to take action, and domestic spending on HIV now accounts for more than half of global HIV resources.

“We have the tools, the science and the knowledge to end AIDS once and for all. But we cannot let confidence turn to complacency,” he stated.

“Progress remains uneven,” he said, noting that two out of three children who need treatment do not get it; death rates among adolescents are increasing; and epidemics in Eastern Europe, Central Asia, the Middle East and North Africa are getting worse.

Also, progress is lagging on targets such as reducing sexual transmission by 50 per cent and halving HIV transmission among people who inject drugs. Stigma, discrimination and criminalization of people who are the most vulnerable to HIV are also getting worse in parts of the world, he added.

“The goal of ending AIDS remains a major challenge,” Mr. Ban said, while encouraging Member States to continue the vital debate on ensuring how this important objective is best reflected in the post-2015 development agenda.

“With the ongoing commitment of Member States along with the work of UNAIDS [the Joint UN Programme on HIV/AIDS] and the entire UN system, we have the capacity to deliver a great gift to the world: ending AIDS through the shared vision of no new HIV infections, no discrimination and no AIDS-related deaths.

“Let us make good on that promise. Millions of lives depend on us.” 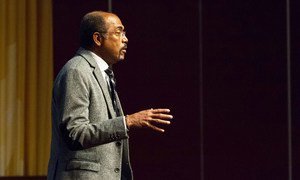 The United Nations today reported accelerated progress in combating HIV/AIDS in much of the world, with significant decreases in new infections and deaths, but worrying signs persist that some regions and countries are falling behind in the global battle.