The United Nations has welcomed the upcoming launch of the Truth and Dignity Commission in Tunisia, calling it a step forward in addressing past human rights violations in the North African nation.

“The Commission is a very welcome step forward in addressing the human rights violations of the past, establishing the truth and providing accountability, recognition and reparations to the victims,” OHCHR spokesperson Rupert Colville told reporters in Geneva.

In the wake of the 14 January 2011 revolution, Tunisia embarked on a dramatic transition towards increased democratic governance as a wave of popular protests that became known as the “Arab Spring” swept North Africa and the Middle East. As part of the broad and complex transformation in Tunisia under new leadership, the authorities have worked closely with several UN bodies and agencies.

In partnership with the Ministry of Human Rights and Transitional Justice OHCHR, UNDP supported a national dialogue on transitional justice, with the active involvement of civil society and victims' rights organizations. That process led to a 2013 draft law establishing the Commission on Truth and Dignity.

The UN supports a range of efforts to uncover the facts about gross violations of human rights and international humanitarian law, and to promote justice, propose reparations and recommend reforms of abusive institutions.

Over the past year, the UN has supported Commissions of Inquiry on, respectively, the Central African Republic, Syria and the Democratic People's Republic of Korea, as well as the establishment of the Truth and Dignity Commission in Tunisia.

Monday's seminar will be addressed by President Mohamed Moncef Marzouki and a number of other high-level officials.

UN High Commissioner for Human Rights Navi Pillay will address the seminar through a video message, as will Desmond Tutu, the President of the South African Truth and Reconciliation Commission.

The heads of several other such commissions from Poland, Morocco, Peru, Guatemala and Kenya will also be there to share experiences from their countries. 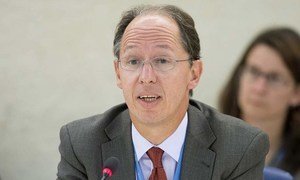 At a time when human rights violations persist around the world, United Nations Secretary General Ban Ki-moon stressed the importance of the individual and collective right to the truth for the promotion of humanitarian law and justice, and called on the international community to recommit to helping victims and protecting those who fight to uncover facts.