5 June 2014
Launching the United Nations Decade of Sustainable Energy for All, Secretary-General Ban Ki-moon today hailed modern energy services as the source of profound and life-changing opportunities – for the poorest communities and the richest investors – and urged generating the innovative ideas and vital partnerships to wholly transform the global energy landscape.

“We are here because we understand that sustainable energy is central to the post-2015 sustainable development agenda,” the UN chief told the first annual Sustainable Energy for All Forum, which opened yesterday in New York and wraps up tomorrow, aiming to generate momentum for Mr. Ban’s eponymous 2011 initiative that brings together governments, civil society and business to make sustainable energy for all a reality by 2030.

The Forum, which sets the stage for the launch of the UN Decade (2014-2024), was also addressed by World Bank President Jim Yong Kim (by video) and John Ashe, President of the UN General Assembly, which designated the Decade as a vehicle to increase advocacy and action.

Kandeh Yumkella, the Secretary-General’s Special Representative and CEO of SE4ALL (Sustainable Energy for All), announced that the initial two years of the Decade would be focused on a campaign for energy access for women and children’s health.

He said that while energy is a global issue, in many places, it is a woman’s issue. It can mean the difference between safety and fear, freedom and servitude, and even life and death. “The world must come together to end energy poverty and ensure that the poor can manage their lives and thrive economically."

“The Sustainable Energy for All initiative is maturing and bearing fruit – thanks to you,” Mr. Ban told the Forum, noting that commitments worth many billions of dollars have been pledged and delivered. More than 80 developing countries have joined the initiative. From India to Brazil a growing number of people have light and power where there was none before.

“From NGOs to multilateral development banks, we are working together for a common goal,” said the Secretary-General, recalling that the initiative had set three targets: ensuring universal access to modern energy services, and doubling the global rate of improvement in energy efficiency and the share of renewable energy in the global energy mix, all by 2030.

“Our efforts so far show that these objectives are realistic. Our focus now must be to achieve them,” he said, noting that while some 30 countries have announced relevant action agendas this year, the declaration of the UN Decade will provide an “extra boost.”

Indeed, Mr. Ban explained that the Decade can bring the world closer to the goals of universal energy and a life of dignity and opportunity for all. “Modern energy services are the key to changing people’s quality of life. Clinics can store life-saving vaccines. Children can study after dark. Cleaner cookstoves can save the lives of millions of women and children every year. Electricity can power street-lights that will make women safer,” he said.

“The benefits will be felt throughout society in all countries. That is why we must continue to build our initiative and bring more partners and stakeholders aboard,” he said, adding that the Forum should be seen as an annual meeting place for the global energy community. “Here we can shape a new energy future. That future starts now.”

Looking forward to the 23 September climate summit in New York, the Secretary-General said, “The more you bring in terms of concrete deliverables, the more we can achieve towards our objectives, and the better we can support global efforts to combat climate change and strengthen resilience. I count on all actors here today to deliver new and expanded commitments and partnerships that will transform the global energy landscape.”

Energy is woven into the fabric of human life at all levels, and all people and all nations need access to energy to grow and prosper. But it is precisely for this reason that the crippling lack of access to sustainable energy services is so important to address at this point in time, he said.

“As we prepare to usher in a new development paradigm in the post-2015 era, the issue of sustainable energy for all must form an integral part of our deliberations on shaping a sustainable future,” he declared, referring to the ongoing UN-led effort to craft a global development agenda to succeed the landmark Millennium Development Goals (MDGs). 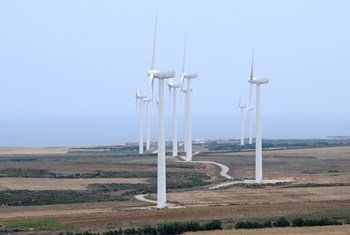 3 June 2014
The number of developing countries with policies in place to support renewable energy has increased six-fold in just eight years, resulting in one-fifth of the world’s power production now coming from renewable sources, according to a United Nations-backed report produced ahead of the UN Sustainable Energy for All Forum.