'Raise your voice, not the sea level,' urges UN on World Environment Day

“On World Environment Day, millions of individuals, community groups and businesses from around the world take part in local projects – from clean up campaigns to art exhibits to tree-planting drives,” Secretary-General Ban Ki-moon said in his message for the Day, marked every year on 5 June.

Mr. Ban was referring to activities and events taking place worldwide – ranging from a 45,000-strong clean-up campaign involving UN staff throughout Kosovo and the Baltimore Orioles baseball team raising awareness of the environment in Sarasota, Florida, to a bike ride around the lakeside in Geneva, Switzerland – all aiming to raise awareness of the Small Island Developing States (SIDS) and the convening of a youth conference on “Eco-civilization and Green Development” in Shanghai.

In support of the UN designation of 2014 as the International Year of Small Island Developing States, World Environment Day will focus on those countries in the broader context of climate change as its theme. Many of the events under way will also spotlight the upcoming Third International Conference on the Small Island Developing States, set to be held in Apia, Samoa from 1 to 4 September.

“Small island nations share a common understanding that we need to set our planet on a sustainable path,” said the Secretary-General, explaining that reaching that goal demands the engagement of all sectors of society in all countries.

“This year, I urge everyone to think about the plight of Small Island Developing States (SIDS) and to take inspiration from their efforts to address climate change, strengthen resilience and work for a sustainable future,” said the UN chief. “Raise your voice, not the sea level.”

Home to 62.3 million people, these island nations play a crucial role in protecting oceans while contributing little to climate change - emitting less than 1 per cent of global greenhouse gases.

But they suffer disproportionately from the effects of climate change owing to their small size, remote locations, and limited economic resilience. Research shows that by 2100, global warming could lead to a sea-level rise of up to 2 meters, making many of these island States, especially in the Pacific region, uninhabitable.

While climate change adaptation was a top priority for island nations, the lack of financial resources is an obstacle, with, for example, the capital cost of sea-level rise in the Caribbean Community countries alone estimated to reach $187 billion by 2080.

“Investing now to head off such a massive economic impact makes sound business sense,” Mr. Steiner said in his message.

A new report by UNEP says that climate change-induced sea-level rise in the world’s 52 small island nations – estimated to be up to four times the global average – continues to be the most pressing threat to their environment and socio-economic development; with annual losses at the trillions of dollars due to increased vulnerability.

UN General Assembly President John Ashe, in his message on the Day, also appealed for a global call to action for people across the world to support SIDS and low-lying coastal States endangered by rising sea levels, and disproportionately impacted by climate change, the loss of biodiversity and forests and overfishing.

“Only by transitioning together to a green economy can we ensure a sustainable prosperous future for all countries threatened by rising sea levels,” Mr. Ashe said.

In her message on the Day, Christiana Figueres, Executive Secretary of the UN Framework Convention on Climate Change (UNFCCC), said that while small islands faced many challenges, they are also leaders under that treaty “both morally and practically” in terms of reminding nations of the risks and collective responsibilities to act while driving ambitious national and international action.

She went on to site a host of SIDS-driven initiatives, from improved adaptation of water resources in the Comoros to wind power projects in Cape Verde, the Dominican Republic and Jamaica and methane capture in Papua New Guinea and Cuba, that have leveraged the UN Clean Development Mechanism to build their own clean energy futures. Many of these nations have undertaken National Adaptation Programmes of Action under the Convention.

“Our pathway is clear. Clean energy economies produce profits without pollution, better livelihoods in stable industries, restore health and wider wealth and preserve water and essential resources,” Ms. Said, calling on all raise their voices and their ambition now.

On 5 June 1972, the General Assembly formed UNEP to, "provide leadership and encourage partnership in caring for the environment by inspiring, informing, and enabling nations and peoples to improve their quality of life without compromising that of future generations."

That same day was also designated World Environment Day and has since been celebrated as a worldwide day of environmental awareness.

Over the years it has grown to be a broad, global platform for public outreach that is widely celebrated by stakeholders in over 100 countries. It also serves as the 'people's day' for doing something positive for the environment, galvanizing individual actions into a collective power that generates an exponential positive impact on the planet.

During the global celebration in Barbados, UNEP designated Ian Somerhalder – an actor best known for his work on the international hit TV series, “The Vampire Diaries,” and on the critically acclaimed drama “Lost” – as a Goodwill Ambassador.

He joined fellow UNEP Goodwill Ambassadors Gisele Bündchen, Don Cheadle and Yaya Touré in sending an SOS to the world on behalf of SIDS. Their ‘message in a bottle’ is: “We are all connected. The challenges faced by islands will face us all. So, every action we take to reduce waste and mitigate climate change counts. Join one of our teams and pledge to make a difference by taking action for WED.” 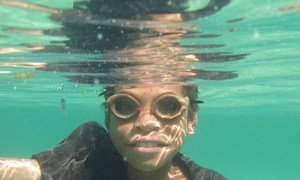 Tiny though some may be, islands play a huge role in sustaining life on the planet – making up less than 5 per cent of Earth’s landmass, they are home to 20 per cent of all bird, reptile and plant species – and protecting their fragile ecosystems from ill-considered development, polluted waters and invasive species is the main focus of this year’s International Day for Biodiversity.