OCHA/Naomi Frerotte
Children returned to their classroom in Kolula, South Kivu, Democratic Republic of the Congo, after armed conflict had forced the whole population to flee and hide in the forest for several weeks.

3 June 2014
Senior United Nations officials for the Great Lakes region of Africa are in the Democratic Republic of the Congo (DRC) to draw attention to continuing insecurity there, while the world body reported today that the fighting and a decrease in financial resources is causing millions of people to go hungry.

Ninety-five per cent of the population in the DRC lives on less than two dollars per day, and nine per cent of children under the age of five are acutely malnourished, according to WFP.

Displaced families living in camps, most of whom are female-headed households, as well as refugees from the Central African Republic, are also particularly vulnerable.

The deteriorating situation was caused by the continuing conflict and insecurity which prevented people from growing food and a decrease in international food aid, Ms. Byrs said. In addition, low levels of government spending on socio-economic sectors such as education, health, sanitation, infrastructure and agriculture, are worsening the situation.

She warned that WFP needs $21 million to carry out its humanitarian operations through October, and will be forced to cut its programmes if it does not receive the aid.

Meanwhile, the Secretary-General’s Special Envoy to the Great Lakes Region, Mary Robinson, is in the DRC today wrapping up a two-day visit to assess the progress being made on the Peace, Security and Cooperation Framework for the DRC and the Region – signed by 11 nations in February 2013 – and since dubbed the “framework of hope.”

She is joined by Ban Ki-moon’s Special Representative in the DRC, Martin Kobler, who is also the head of the UN peacekeeping mission in the country, known by its French acronym MONUSCO.

During the visit, the envoys met with representatives of the government, civil society and the international community “to hear firsthand about the implementation of commitments to the Peace, Security and Cooperation Framework and what they can do to support further progress,” according a UN spokesperson.

Earlier, the group was in Burundi, where the envoys met with President Pierre Nkurunziza and other political leaders, as well as civil society representatives.

In a joint statement issued after that visit, the envoys said that they were very concerned about the constraints on political space and civil liberties in the lead-up to next year’s general election.

They added that Burundi had made commendable progress in overcoming a history of conflict, but that progress risked being lost without an inclusive, transparent and peaceful election process. 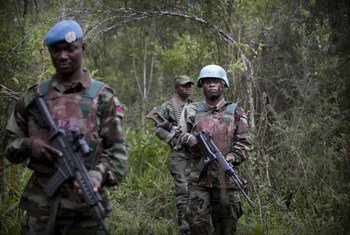 1 June 2014
The United Nations and its partners today renewed their call for the complete surrender of all leaders and combatants of the rebel Democratic Forces for the Liberation of Rwanda, which has caused untold suffering in eastern Democratic Republic of the Congo (DRC) for many years.