‘It is time to act,’ Ban declares at launch of video campaign to end sexual violence

OCHA/R. Maingi
Hundreds of thousands of women displaced by conflict and living in camps in Somalia are especially vulnerable to sexual and gender-based violence, having lost their families and homes.
3 June 2014

Speaking at the launch of a video campaign on ending sexual violence through gender equality, Secretary-General Ban Ki-moon said today that it is time to demand action to eliminate a scourge that harms millions of women and girls around the world.

“I am here to declare with all of you: it is time to act,” Mr. Ban said, speaking alongside his Special Representative on Sexual Violence in Conflict, Zainab Hawa Bangura, and the Executive Director of UN Women, Phumzile Mlambo-Ngcuka.

The launch of the video campaign was organized by the Permanent Mission of the United Kingdom to the UN and comes ahead of a global summit to be held next week on the issue.

The Secretary-General decried recent attacks against women and girls around the world. “I was especially appalled by the brutal rape and gruesome murder of two teenaged women in India who had ventured out because they did not have access to a toilet,” he said.

He highlighted a personal hero, Dr. Denis Mukwege, a Congolese gynecologist, who repairs the internal physical damage caused by rape.

“Dr. Mukwege says sexual violence continues because of indifference, as if the crimes happen to someone else,” Mr. Ban recalled. “But really it happened to one of us. We all belong to the same family of human society,” he said, quoting Dr. Mukwege.

In March, Mr. Ban launched the “He for She” campaign urging men to stand up for the rights of their mothers, sisters and daughters. The network includes top government officials, artists and business representatives.

In the video launched today, Mr. Ban urged men in particular to join the fight for gender equality, saying it is the collective responsibility to shield women and girls from the violence that harms them and degrades all.

“Together, we can ensure that conflicts are not fought on the bodies of innocent civilians,” he stated. 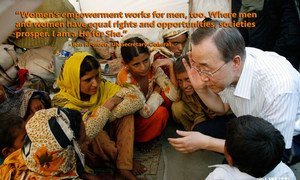