The United Nations has teamed up with leading businesses to advance women’s rights and empowerment through a new advisory council comprised of private sector chiefs with a strong commitment to supporting women and girls.

“This Council’s focus is to accelerate economic and social progress for women and girls worldwide by combining our expertise, reach and resources for greater results,” said the Executive Director of UN Women, Phumzile Mlambo-Ngcuka.

“The Council is being launched at just the right time, as UN Women mobilizes for the 20th anniversary of the Beijing Women’s Conference under the theme: Empowering Women, Empowering Humanity,” she added in a news release.

The invitation-only Council, which will meet twice a year, is comprised of prominent private sector leaders, whose companies have a global footprint and identify as corporate citizens that already demonstrate a strong commitment to supporting women and girls.

“Given our mandate in advancing gender equality and the empowerment of women, we hope that the Council will provide the foundation necessary to further expand diversified representation in terms of company size, region, and increased female membership,” said Ms. Mlambo-Ngcuka.

The Chairman and Chief Executive Officer of The Coca-Cola Company and first Chair of the new Council, Muhtar Kent, said that empowering women is one of the most important ways to accelerate growth across the global economy.

“By bringing together corporations, government and civil society through Golden Triangle partnerships, we can positively impact women, their families and their communities,” he stated. 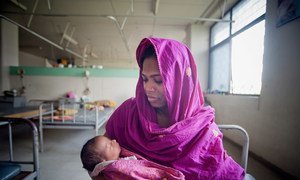 Secretary-General Ban Ki-moon today highlighted the role that the private sector can play in contributing to improve maternal health services across the world through the United Nations Every Woman Every Child initiative.