United Nations officials today welcomed the initiative announced by President Barack Obama to limit emissions from power plants in the United States, voicing their hope that it will spur other countries to take concrete action to combat climate change.

In a statement issued by his spokesperson, Secretary-General Ban Ki-moon called the initiative “a significant step toward reducing global greenhouse gas emissions that are disrupting the climate, exacerbating extreme weather patterns, and threatening human health, sustainable economic growth and development.”

Mr. Ban, who is convening a climate summit later this year in New York, called on all countries to accelerate their efforts to reduce emissions and strengthen adaptation and resilience.

“He calls on world leaders to take advantage of the unique opportunity provided by the climate summit he will host in September by bringing bold announcements and actions they will undertake nationally, as well as in multilateral and multi-stakeholder settings to address climate change,” the statement added.

The Executive Secretary of the UN Framework Convention on Climate Change (UNFCCC), Christiana Figueres, also welcomed the new initiative, which comes ahead of the next round of UN climate talks that will begin on Wednesday in Bonn, Germany, where ministers will discuss key political issues which can be resolved ahead of a successful, new and universal climate agreement expected to be reached in Paris next year.

“The decision by President Obama to launch plans to more tightly regulate emissions from power plants will send a good signal to nations everywhere that one of the world’s biggest emitters is taking the future of the planet and its people seriously,” Ms. Figueres said in a statement.

It is also a good signal for upcoming climate summit in September and towards securing a new, and more importantly meaningful, climate agreement in Paris in 2015, she added.

“I fully expect action by the United States to spur others in taking concrete action – action that can set the stage and put in place the pathways that can bend the global emissions curve down in order to keep worldwide temperature rise under 2 degrees Celsius this century.” 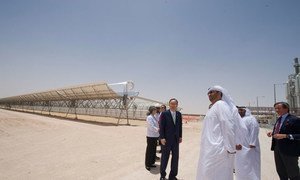 In Abu Dhabi, UN chief warns still 'too many sitting on the fence', urges bold leadership on climate change

With the ominous and costly impacts of climate change profoundly evident, United Nations Secretary-General Ban Ki-moon warned today that too many stakeholders are still “sitting on the fence”, and he challenged participants at a climate conference in Abu Dhabi to help him build persuasive political arguments to convince policymakers that the time for bold action is now.