Young people from more than 1,000 youth organizations have gathered today at United Nations Headquarters to add their voices to the ongoing discussion about a new global agenda that will succeed the Millennium Development Goals (MDG).

“This is about your future – so it must be your agenda,” Secretary-General Ban Ki-moon told the Economic and Social Council (ECOSOC) Youth Forum, a two-day event that kicked off this morning in New York.

“There is a world of need out there, but also a world of opportunity. So I urge you to keep doing your part. Keep showing your leadership as global citizens,” he added, urging the youth participants to “keep making a difference.”

The Forum open as the United Nations and its Member States are working to craft a sustainable development agenda beyond 2015, the deadline for reaching the mainly anti-poverty targets set in 2000 when the MDGs were adopted. These negotiations must bear in mind that with half the world’s population under the age of 25, the current generation of youth is the largest ever, and specific targets focused on youth should be integrated into any future development framework.

As part of their agenda, Youth Forum delegates will tomorrow deliver the “Global Youth Call” to Member States and Mr. Ban’s Envoy on Youth, Ahmad Alhendawi, spotlighting education, employment and entrepreneurship, health, peace and security, and governance as the thematic areas of greatest concern for them in the future.

More than 1.2 million young people voted in the My World 2015 survey, and participated in a crowdsourcing platform convened by UN agencies and partners, to voice their concerns.

Mr. Alhendawi said that the Forum, now in its third year, has evolved over time, now involving thousands of youth worldwide in the discussion on the post-2015 development agenda. The challenge ahead is how to build a global consensus among youth stakeholders. “A consensus must be forged with complete targets for youth. Young people are sharing the same struggle to reach common aspirations in employment, education, politics and decision-making,” he said.

“Let us seize this opportunity to allow young people to achieve their true potential and to sustain the planet,” he said, calling on them to aim high and hammer out practical steps to achieve the world youth want.

Jobs are the key area that young people want world leaders to focus on. Some 75 million youth are unemployed, and more than 600 million jobs need to be generated globally in the life span of the new development agenda to absorb current unemployment levels and provide jobs to new labour market entrants, according to the UN.

Over the course of these two days, young people will learn more about the issues that they have identified, and to meet with each other to “collectively solve the world’s development challenges,” said ECOSOC president Martin Sajdik.

“Youth are not only the future of tomorrow – youth are leaders, entrepreneurs, students, workers, care-givers and problem solvers of today,” he added.

Also addressing youth in today’s open, the current president of the UN General Assembly, John Ashe, urged youth representatives to stay engaged in the decision-making processes underway ahead of the 2015 MDG deadline.

“I urge you to get involved. If you don’t, and an agenda emerges without your priorities addressed, you have no one to blame but yourselves,” he said, adding that a standalone goal on youth was needed in the sustainable development goals. “People like me need to hear from you what your priorities are,” he said.

Today’s plenary session opened with Lisa Russell Spoken Word’s Artists performing a poem, “The world we want,” weaving the lives of young people in different parts of the world with the lines: The world we want is a world that wants us.

Brittany Trilford, Activist and Youth advisor at CIVICUS Alliance highlighted that youth people, who are often marginalized and excluded from resources and decision-making, are “oversimplified and silenced.”

“Despite our large role in society and our exciting potential, there is very little done to harness the power of young people or to target them in development schemes or to measure their impacts at all,” said Ms Tilford, who also delivered the keynote address to the historic UN Fourth World Conference on Sustainable Development, known as Rio+20.

In her address today, she urged young people to take an active role in what is happening around them, “Define the future that you want, and commit to it, and work hard at it and ask other young people to do the same.”

“Get angry at current leaders for leaving you so much to clean up, and demand that they fix up their game now,” she urged. 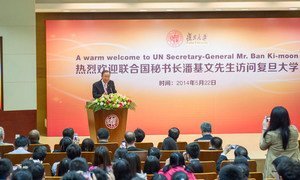 At a “time of test” for the human family, Secretary-General Ban Ki-moon today encouraged students and faculty at Shanghai’s Fudan University to help the United Nations as it begins in earnest work on the fundamental challenge of building an inclusive, universal 21st century blueprint “that will steer our world onto a truly sustainable, prosperous and peaceful path.”