Despite major global progress in improving the health of children and their mothers, United Nations Secretary-General Ban Ki-moon today urged participants at a summit in Toronto to show the leadership, build the key partnerships, generate the financing and devise the creative solutions needed to deliver a world of health, safety and possibility for every woman and every child.

“Let no mother have to grieve a lost child. Let every boy and every girl have the opportunity to know and enjoy their sisters and brothers. That world is possible. Now,” declared Mr. Ban in opening remarks to a summit on maternal, newborn and child health, “Saving Every Woman Every Child: Within Arms Reach.”

The UN chief delivered his call to action following a personal revelation that improving the health and well-being of women and children was an issue close to his heart because, when he was a boy, rather than being the eldest child in his family – as he is known – he was, in reality, the third child; his parents had lost another son and a daughter before he was born.

“When I was a boy, I remember it was considered 'normal' to see women and children die in my village. People accepted this as a fact of life,” he said, explaining, that food was not always sufficient. Women feared giving birth. “What should have been the most joyful day was often the scariest or the saddest day instead.”

“Today, too many people still live that reality around the world. We cannot accept that it is 'normal' to lose any woman, any child, anywhere,” the Secretary-General said, citing healthy women and children as the very foundation that enables all societies to grow and flourish. “They are the best investment we can make,” he continued, underscoring that this was why he launched the “Every Woman Every Child” initiative in 2010. 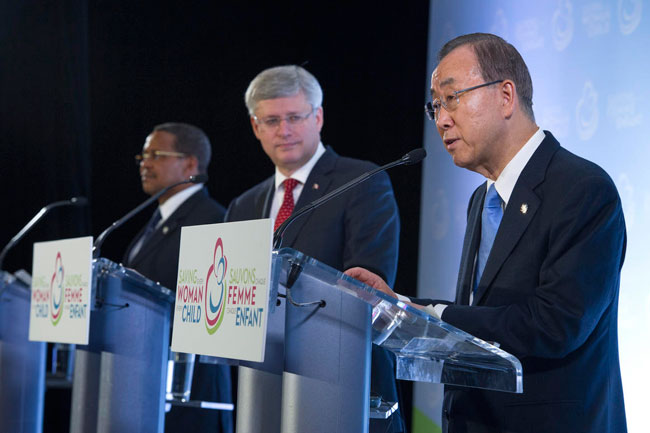 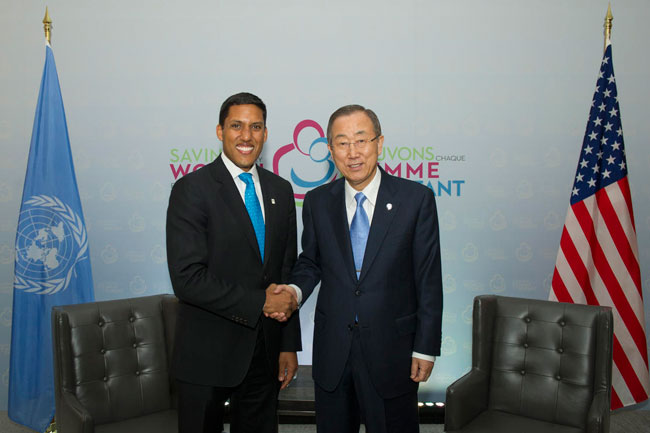 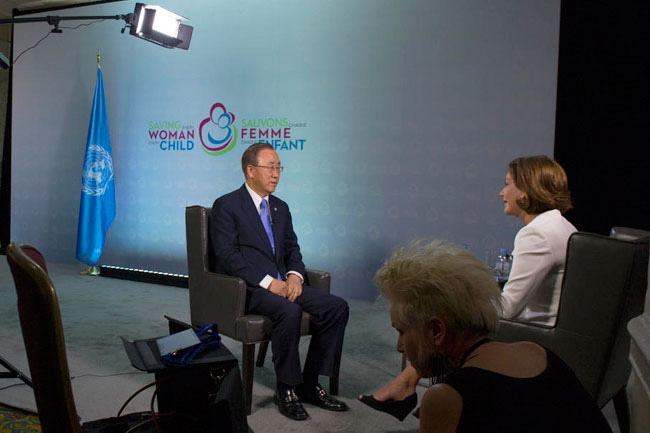 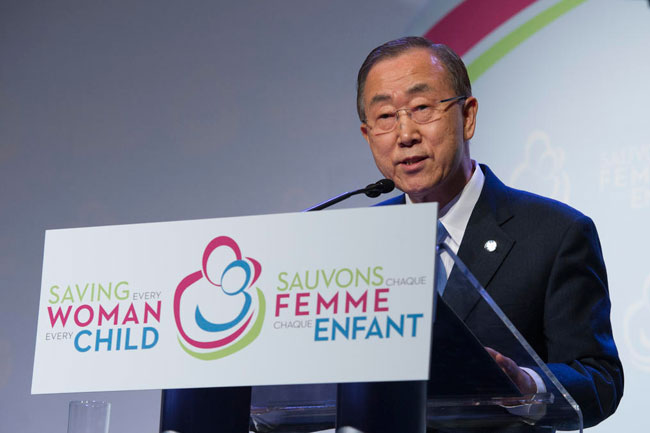 Secretary-General Ban Ki-moon addresses the Global Summit in support of the “Every Woman Every Child” initiative. UN Photo/Eskinder Debebe 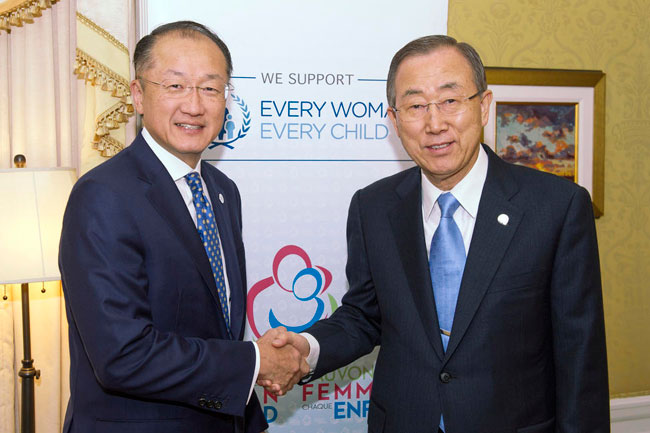 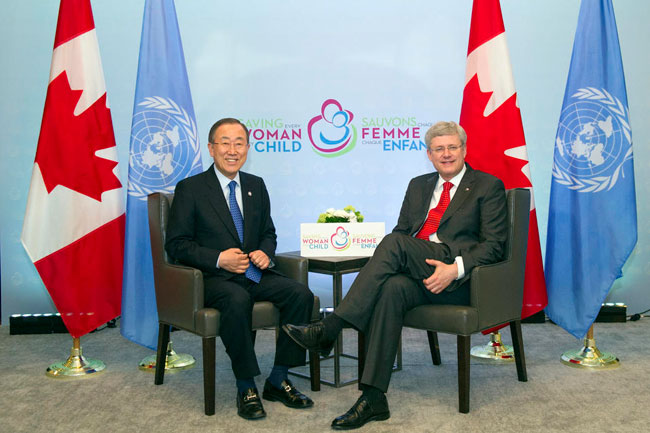 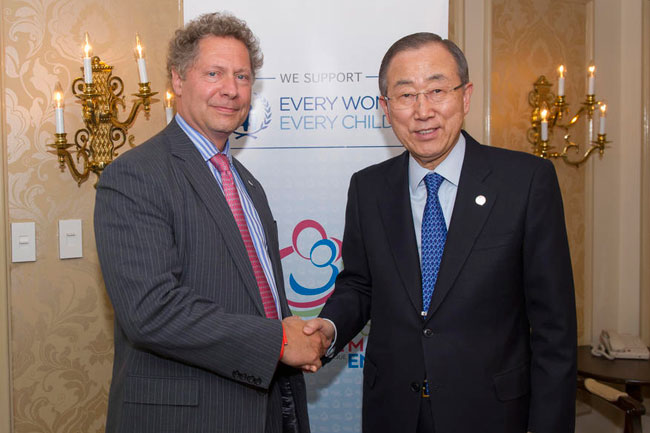 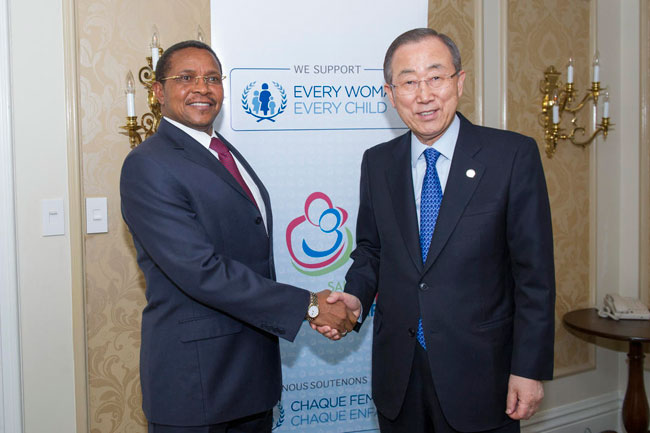 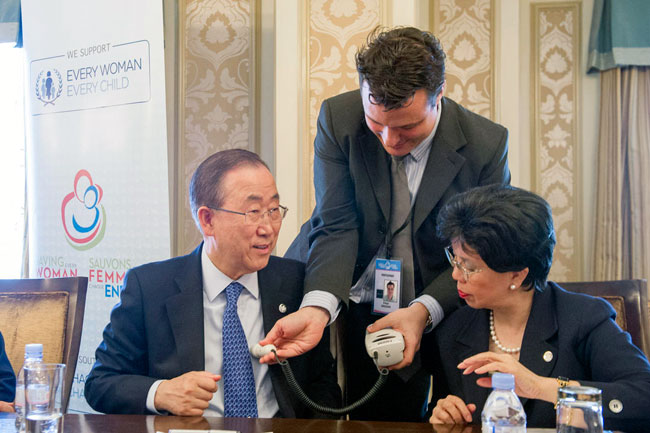 Secretary-General Ban Ki-moon is given a demonstration of innovations for women's and children's health by innovators organized by Grand Challenges. Dr. Chan of WHO looks on. UN Photo/Eskinder Debebe 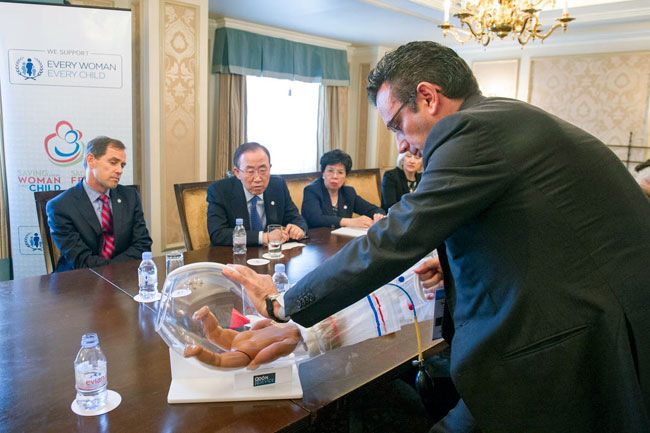 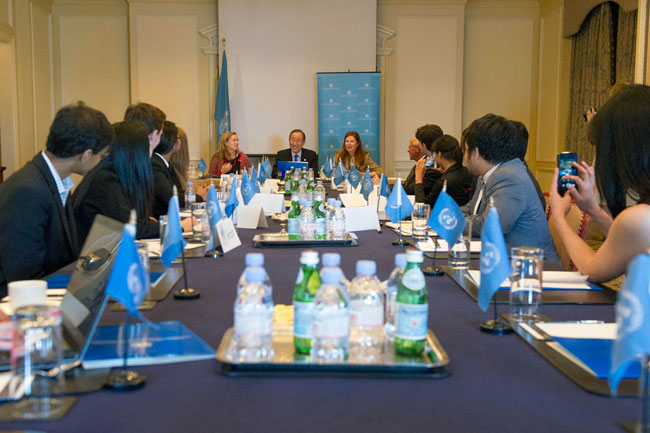 Mr. Ban said that he wanted to build on the longstanding efforts of the UN and its global partners from all sectors towards achieving the health Millennium Development Goals (MDGs), and to support the UN's Global Strategy for improving the health and well-being of women and children.

“Thanks to many of you in this room and the more than 300 partners of the Every Woman Every Child movement, there has been remarkable improvement in the health of women and children around the world,” said the UN chief, adding that this has also been possible because, globally, the health community has come together and brought in new and innovative partners.

Yet, he said that while the world should be “immensely proud” of its achievements, including currently reducing under-five deaths faster than at any time in the past two decades and cutting maternal deaths by almost half since 1990, annually, some 289,000 women still die while giving birth and an estimated 18,000 children die every day, mostly from preventable causes. In particular, an estimated 5.5 million newborn and still-birth deaths occur every year.

Calling for a redoubling of efforts so gains are not reversed in any country, Mr. Ban said overall success depends crucially on five factors: strong leadership at the highest levels; the commitment of multi-stakeholder partners at the country level; predictable financing; accountability for resources and results; and innovation.

“All of us, rich and poor nations, the business community, the United Nations and civil society have roles to play in accelerating our efforts to achieve the health MDGs by the 2015 deadline,” he said, adding that stakeholders must also ensure that women's and children's health and well-being in particular is featured as strongly in the new development agenda.

Urging a focus on the most vulnerable and hard-to-reach women and children so that no one would be left behind, he said that beyond 2015, key factors such as water, sanitation, nutrition, education, climate change, energy, gender equality and women's empowerment also play a critical role in improving health.

“Health should be at the centre of sustainable development. With sustained and increased investments and a focus on equity and human rights, a world with zero preventable maternal and child deaths can be achieved within a generation,” said the Secretary-General, adding: “It is our duty not only to ensure survival but to enable these women and children to thrive.”

Having arrived in Canada yesterday, Mr. Ban has held several meetings with leaders in Toronto for the summit. He met with Canadian Prime Minister Stephen Harper and the two discussed, among other things, strengthening accountability for women's and children's health and the need to accelerate the achievement of the MDGs.

In a meeting with President Jakaya Kikwete of Tanzania, Mr. Ban expressed his appreciation for the President's leadership on sustainable development issues. The two also discussed the situation in Africa's Great Lakes Region and Mr. Ban expressed gratitude for Tanzania's contribution to the UN Organization Stabilization Mission in the Democratic Republic of the Congo (MONUSCO), including through its participation in the Force Intervention Brigade.

The majority of the almost 3 million children who die before they turn one month old could be saved if they received quality care around the time of birth, according to the findings released today in a study supported by the UN Children’s Fund (UNICEF), which is urging additional attention and resources for this group of children.