The top United Nations envoy in South Sudan announced today that she is stepping down from her post in July after leading the world body’s efforts in the country for nearly three years.

Hilde F. Johnson, the Secretary-General’s Special Representative and head of the UN Mission in South Sudan (UNMISS), made the announcement in the capital, Juba, following a meeting with President Salva Kiir.

“I informed the President that I have come to the end of my term and I will be departing South Sudan. It has been a real honour to serve and I will be still here for a few weeks but South Sudan has a strong place in my heart and will continue to have that.”

Ms. Johnson has been at the helm of UNMISS since the mission was established in July 2011, when the country gained its independence from Sudan.

On Tuesday, the Security Council extended UNMISS until 30 November of this year, and revised its mandate to give priority to the task of protecting civilians and to address the security, humanitarian and political crisis that has gripped the nation for the past six months.

Political infighting between President Kiir and former Vice President Riek Machar turned into a full-fledged conflict in mid-December that has uprooted over one million people, including 75,000 and 80,000 civilians who have sought safety at UNMISS bases around the country for months since the violence began. 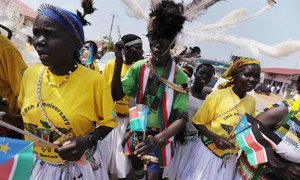 On the eve of South Sudan’s independence, the Security Council today voted unanimously to set up a new United Nations mission to help Africa’s newest nation consolidate peace and lay the foundation for longer-term state-building, conflict prevention and economic development.