FEATURE: New challenges spur UN peacekeeping to become ‘a force for the future’

From deploying new technologies such as drones and robots to boosting the number of women in its ranks, United Nations peacekeeping is striving to confront new challenges and offer best value for funding as it serves communities around the world.

“The United Nations is improving logistics and administrative practices, strengthening infrastructure and taking other steps to harness the power of our personnel,” said Secretary-General Ban Ki-moon. “Our goal is to ensure that peacekeeping is a cost effective, valuable investment that brings enormous benefits and, above all, saves lives.”

Today, more than 116,000 UN military, police and civilian personnel from more than 120 countries serve in 16 peacekeeping operations, often at great personal risk. They perform a variety of tasks, from stabilizing communities torn apart by conflict and protecting civilians to promoting the rule of law and advancing human rights.

To assist them in carrying out such critical duties, UN peacekeeping is on a mission of its own: to modernize and innovate to ensure it can tackle tomorrow’s peace and security challenges, and to be “a force for peace, a force for change, and a force for the future,” according to the Department of Peacekeeping Operations. 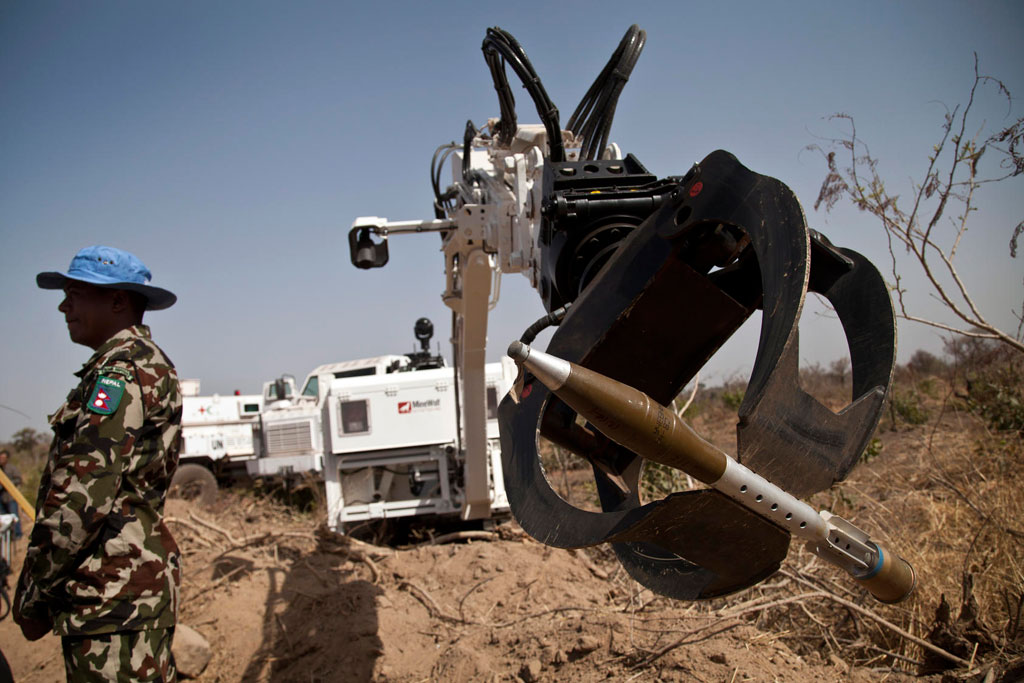 “We’re operating in the 21st century and we cannot continue just using tools of 50 or 100 years ago. We have to be current with all the developments in the world,” Under-Secretary-General for Peacekeeping Operations told the UN News Centre.

“We need to deliver better services, possibly for less. I think that using technology is one way to address that very legitimate concern of our Member States.”

For this reason, the International Day of UN Peacekeepers, observed annually on 29 May, kicks off a six-month campaign designed to raise political support and highlight the fact that UN peacekeeping is ‘good value’.

An example of the use of new technology is the introduction of unmanned aerial vehicles (UAVs), which are unarmed and used solely for surveillance purposes, in the vast Democratic Republic of the Congo – a technological first for the UN and one which is now being considered for other peacekeeping operations. 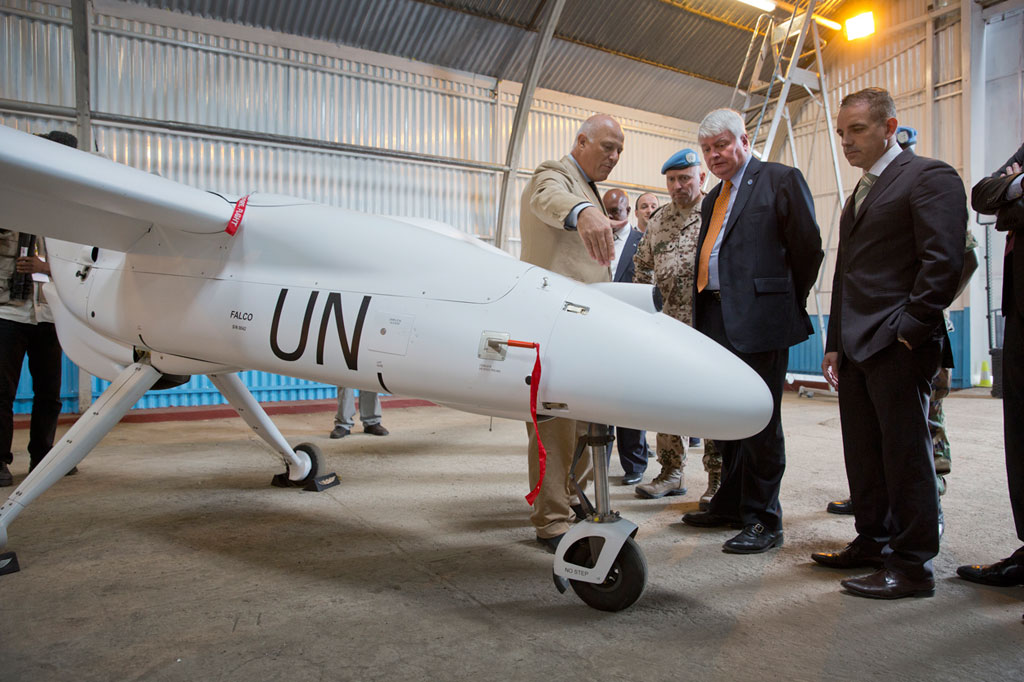 Head of Peacekeeping Operations Herve Ladsous (second right), inspects an Unmanned/Unarmed Aerial Vehicle (UAV) that will be used in eastern Democratic Republic of the Congo, during a ceremony in Goma. Photo: MONUSCO/Sylvain Liechti

One of the ways that UAVs have made an impact on the ground was earlier this month during a ferry accident in Lake Kivu. After a UAV spotted a boat in distress, the UN peacekeeping mission in the country immediately sent its speedboats and helicopters to the scene and was able to rescue 15 people.

“From the second it spotted the sinking ship, the UAV stayed at the scene searching for survivors and providing situational awareness,” said Ameerah Haq, Under-Secretary-General for Field Support.

“This illustrates the flexibility and the ability of UAVs to greatly enhance situational awareness and aid life-saving operations by the provision of real-time imagery to support reaction to incidents,” she added.

Also in eastern Democratic Republic of the Congo, where communities are under threat from armed militias, the UN deployed a specially equipped ‘Force Intervention Brigade’ to support the national army. In November, the brigade successfully supported the military defeat of the M23 armed group, liberating areas under its control and removing the threat posed to civilians. 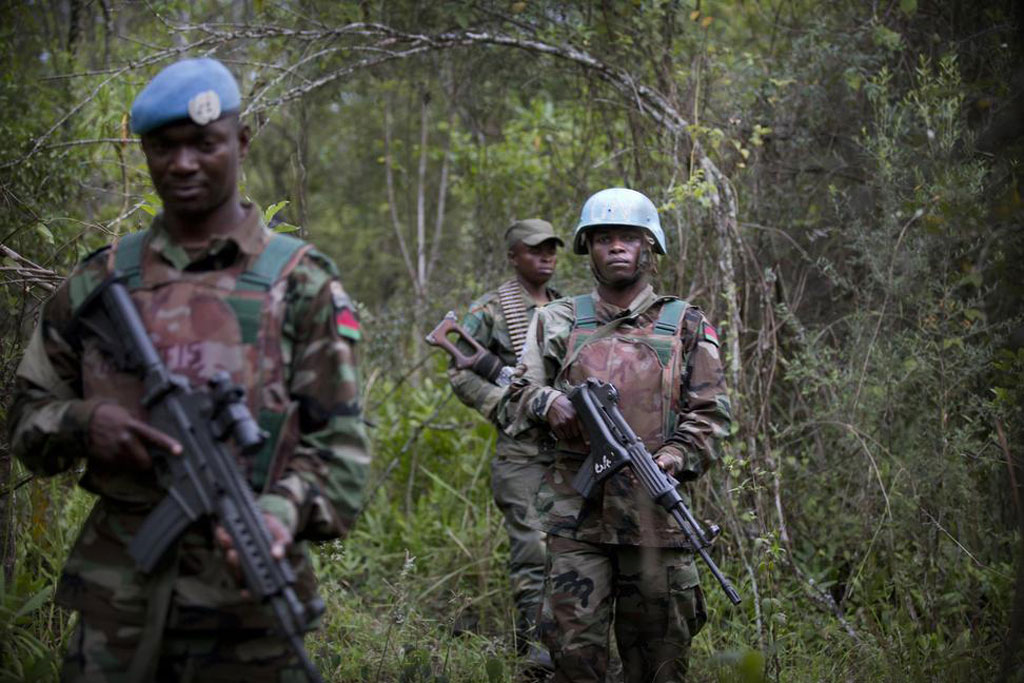 Elements of the Malawi contingent of the Intervention Brigade on a joint patrol with Government forces in the Democratic Republic of the Congo (DRC). UN Photo/Sylvain Liechti

The UN has also enhanced its use of thermal imaging, closed-circuit television, night vision abilities and GIS [geographic information systems] data to improve situation awareness to provide better for the safety and security of its peacekeepers.

As part of the ongoing effort by the Departments of Peacekeeping Operations (DPKO) and of Field Support (DFS) to take advantage of emerging technologies and innovations, a group of five experts is being tasked with advising on how best to use these capabilities.

The group, led by seasoned peace and security expert Jane Holl Lute, will examine how these technologies can be leveraged to enable peacekeepers to respond more effectively to an increasing number of complex, multidimensional tasks in challenging field environments.

It will also look at how technological innovations can improve operational effectiveness, multiply impact and enhance safety and security of both peacekeepers and host communities.

As part of its modernization endeavour, the UN is boosting the representation of women among its ranks, with the belief that female peacekeepers serve as role models in local communities, inspiring women and girls in often male-dominated societies.

In an historic move earlier this month, the Organization appointed its first-ever female force commander. Major General Kristin Lund of Norway will take over military command of the UN mission in Cyprus, whose top leadership post is held by another woman, Lisa Buttenheim. 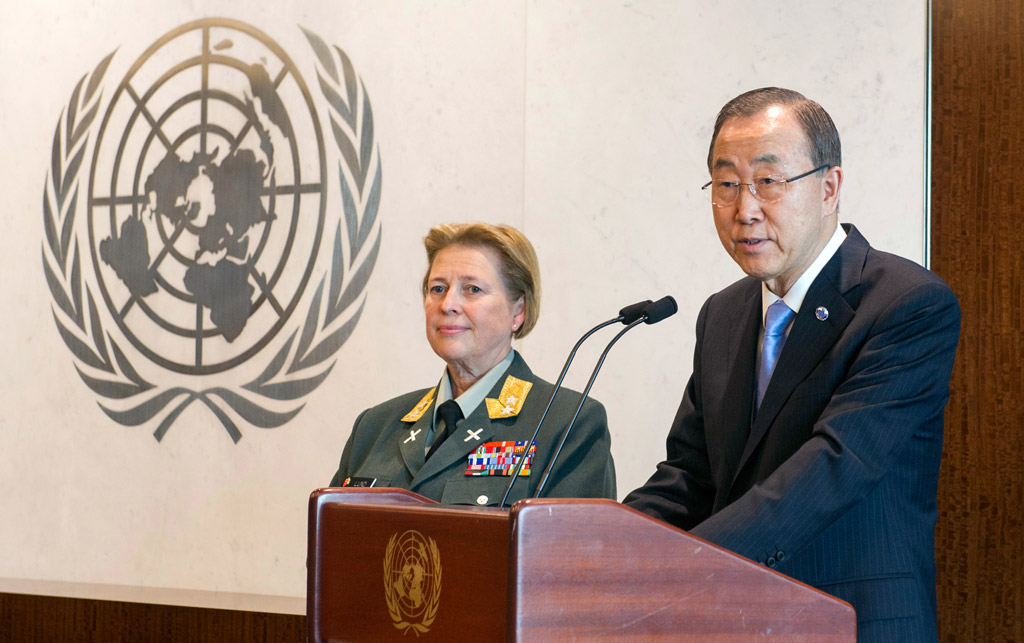 “I think it’s very important that the UN took this step to appoint a female force commander and I hope that I can be a role model for other female officers that see that it’s possible,” Major General Lund told the UN News Centre at the time of her appointment.

UN blue helmets are also aiming to ‘go green’ through the responsible use of limited resources, in a bid to leave mission areas in better shape than when they arrived. Among other steps, GIS data is being used to help find water sources for missions so as not to compete with the local water supply.

Missions are also including waste water treatment plants designed to drastically reduce the need for water and generation of disposable waste, as well as exploring alternative sources of energy such as solar panels.

Another way the UN is looking to innovate is by strengthening partnerships with Member States and regional and sub-regional organizations as well as pursuing cooperation between missions. In Mali and the Central African Republic, it has worked closely with the African Union and other sub-regional groups.

“Looking forward, we will need to develop those partnerships more and more,” said Assistant Secretary-General for Peacekeeping Operations Edmond Mulet, who noted that regional and sub-regional organizations are often the “first respondents” when conflict breaks out, especially on the African continent.

♦ Receive daily updates directly in your inbox - Subscribe here to a topic.
♦ Download the UN News app for your iOS or Android devices.
peacekeep|operations

UN honours peacekeepers killed in the line of duty

Innovating and strengthening the capabilities of United Nations peacekeeping operations is essential to ensure safety and security, to adequately protect civilians, and to modernize mission postures in line with the evolving nature of conflict, the top officials from the UN peacekeeping and field support departments told a special review committee today.