UN Photo/Paulo Filgueiras
Wide view of the Security Council during its meeting on the situation in Ukraine.

28 May 2014
In the Security Council’s first meeting on Ukraine since the presidential election there, United Nations political chief Jeffrey Feltman said violence in the country’s east has dramatically increased and reiterated Secretary-General Ban Ki-moon’s call on President-elect Petro Poroshenko to steer the country away from instability.

“Despite what we at the United Nations hope will be the beginning of a new chapter for Ukraine, violence rages on in parts of the east, causing loss of life and injuries,” Mr. Feltman, the Under-Secretary-General for Political Affairs told the 15-member Council.

He noted that Mr. Ban spoke by phone with the President-elect in the morning to congratulate him “on having received a strong mandate from the people” to steer the country “towards security, greater prosperity and genuine democratic governance.”

The Secretary-General welcomed Mr. Poroshenko’s statements to immediately engage in dialogue and de-escalation, and reaffirmed the critical need to exercise restraint and reach out to eastern Ukraine.

In Lugansk and Donestsk Oblasts, both in eastern Ukraine, a “dramatic increase in deadly fighting” has led to casualties on both sides which continue to increase, Mr. Feltman said.

“While we are unable to confirm the details, the Secretary-General is concerned by reports of scores of casualties; by suggestions regarding the circulation and use of heavier weaponry in the east; and by allegations of arms, fighters, and trucks entering Ukraine,” said the Under-Secretary-General.

He also noted video footage purporting to show a UN-marked helicopter allegedly being used inside Ukraine. While the UN is unable to determine the veracity of the images, Mr. Feltman recalled that countries which contributed peacekeeping equipment must remove all logos and UN signs from the items once they are no longer being used for official UN purposes.

On behalf of Mr. Ban, he further appealed to the international community “to use the outcome of the elections as an opportunity to unite in support of a peaceful, stable, prosperous and united Ukraine.”

In addition, Mr. Feltman expressed Mr. Ban’s alarm at the temporary restraint of 11 Organization for Security and Cooperation in Europe (OSCE) election monitors in Donetsk Oblast. The incident follows the capture of four OSCE monitors on 26 May, who have been held for the past two days.

“The Secretary-General is appalled that international staff have again been put in such grave danger. He calls for their immediate release and appeals to all with influence to assist,” the UN official stressed. 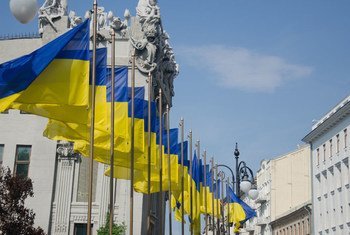 27 May 2014
While welcoming the “generally peaceful” nature of Ukraine’s weekend presidential elections, United Nations Secretary-General Ban Ki-moon today expressed concern that eligible voters in some parts of the county’s crisis torn eastern region were not allowed to participate in the national poll.