With Syria’s culture near ‘point of no return’, UN agency to create safeguard observatory

In hopes of ebbing the ‘cultural haemorrhage’ in Syria, the United Nations cultural agency today announced that it will establish an observatory to monitor and access the state of Syria’s cultural heritage which is ‘reaching the point of no return.’

Based at its office in Beirut, Lebanon, the Observatory will maintain an online platform where national and international stakeholders will share information on damaged structures, looted artefacts and all forms of endangered intangible heritage.

“In some areas we are reaching the point of no return where Syria’s cultural heritage is concerned,” cautioned Irina Bokova, Director-General of the UN Educational, Scientific and Cultural Organization (UNESCO).

“The destruction of heritage represents a cultural haemorrhage in addition to the tragic humanitarian crisis and suffering experienced by the people of Syria,” she added.

In particular, Ms. Bokova highlighted the recent extensive damage to the historical synagogue of Eliyahu Hanabi in Damascus.

“The destruction of one of the oldest synagogues in Syria is a new blow against its religious and cultural heritage, which has already suffered tremendous damage,” she said, referring in particular to the fact that Syria is host to highly significant monuments of Christian, Jewish and Muslim faiths.

“This synagogue bears witness to the cultural diversity of Syria’s history and to the potential of peaceful coexistence among all communities in the country,” Ms. Bokova concluded.

The decision to create the Observatory was made at a UNESCO meeting entitled “Rallying the International Community to Safeguard Syria’s Cultural Heritage”, attended by more than 120 experts from 22 countries to share information, devise policies and improve cooperation during the conflict and beyond. Representatives of major international auction houses also took part in the meeting.

In addition, the participants also called on the UN Security Council to consider a resolution to facilitate the restitution of stolen and illegally exported cultural objects from Syria and ban their sale and transfer.

They also underlined the need to “demilitarize cultural sites,” preventing their use as military bases or targets in keeping with existing international law, notably the Convention for the Protection of Cultural Property in the Event of Armed Conflict (1954), ratified by Syria.

They also emphasized the need to train and raise awareness of police and customs officers in the region and beyond on their role in fighting illicit trafficking in cultural objects.

The conflict in Syria has affected all six of its World Heritage sites, UNESCO reiterated, including through illicit excavation. The UN agency added that there is evidence that at least the Ancient City of Aleppo and the Crac des Chevaliers have been used for military purposes, subjected to direct shelling and targeted explosions.

Intangible cultural heritage, including cultural practices, performing arts and more, is also exposed to serious damage due to social fragmentation, displacement and migration.

“It is vital that the media raise public awareness about the crisis of Syria’s cultural heritage,” said Francesco Bandarin, Assistant UNESCO Director-General for Culture. “Art traders and buyers must be made aware of the risk of illicit trafficking and that international mafia organizations are using the crisis to sell both genuine and fake artefacts from the country.” 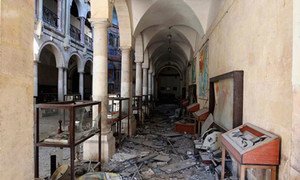