It is time to talk about open defecation, the United Nations declared today, launching a new campaign to end the practice and improve access to toilets and latrines for the 2.5 billion people worldwide without basic sanitation.

“I am here to talk about something the world chooses not to talk about,” UN Deputy Secretary-General Jan Eliasson said in new York at the launch of the campaign, which, among other aims, urges people to “search open defecation,” find out more about the issue and participate in the solutions.

Mr. Eliasson, noting that he introduced the words “toilets” and “open defecation” into the diplomatic discourse, said people get embarrassed when the words are used. For him, the issue is personal: he has been seen children die from diseases that could have been prevented with adequate sanitation.

“It’s not a disease, it’s not a dictator or a regime, it’s not a war, it’s not a weapon, it’s not an act of terrorism. I’m talking about the practice of open defecation,” he declared, noting that poor sanitation, which costs around $260 billion in gross domestic product (GDP) annually, should be given international attention on par with more traditional issues.

Around 1 billion people worldwide practice open defecation, using rivers, fields or other places to relieve themselves due to a lack of latrines or toilets. The practice contributes to the rise of sexual violence and harassment of women and girls, and increases health risks through the spread of diseases, such as diarrhoea.

Ending open defecation would contribute to a 36 per cent reduction in diarrhoea, which kills three quarters of a million children under five each year, according to Nicholas Alipui, Director of Programmes at the UN Children’s Fund (UNICEF), who also participated today.

“Ending open defecation is a human right and a matter of equity,” Mr. Alipui said.

As part of the launch, Raya, a new Sesame Street Muppet to engage children with important messages surrounding proper latrine use and sanitation throughout Bangladesh, India and Nigeria, made a special report on the importance of good sanitation.

The aqua-green sandal-wearing Muppet, introduced by Mr. Eliasson, reported on her top story: “We need more toilets. With more toilets in schools and pledges around the world, we can stop millions of children and grownups from getting sick. Then we can remind everyone to wear shoes and sandals when they go to the toilet… and to wash their hands.”

Sesame Street, through the creative agency Mother, is one of the UN partners working on Water, Sanitation and Hygiene (WASH) issues, along with the UN Millennium Campaign and the Water Supply and Sanitation Collaborative Council, among others.

The campaign is being launched in response to the Deputy Secretary-General’s Call to Action on Sanitation, which focuses on open defecation and how to accelerate global action to reach the sanitation targets of the anti-poverty targets called the Millennium Development Goals (MDGs) by the 2015 deadline.

If you do sanitation right, you actually help five MDGs, said Mr. Eliasson, child mortality goes down, maternal health goes down, and girls stay in school past puberty, so education rates improve.

Also at the launch, the Permanent Mission of Singapore to the UN announced today that it will hold a special event to focus on open defecation and its impact on women and girls.

The UN Deputy Permanent Representative of the country, Neo Ek Beng Mark, who also participated in today’s launch moderated by Andrea Koppel, former correspondent for CNN and current Mercy Corps Vice President of Global Engagement and Policy, stressed that “we need to find a way to target the silences which are rooted in the taboos.”

Among stories he recalled was the push-back his office received when galvanizing support within the General Assembly to designate 19 November as World Toilet Day, with Private Room Day among the suggested alternatives.

“Open defecation is also a euphemism,” he noted in reference to today’s launch. “What we are talking about is shitting in the open.” 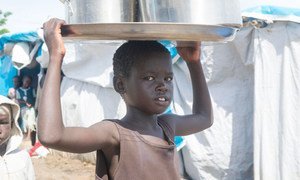 Despite a narrowing disparity in access to cleaner water and better sanitation between rural and urban areas, sharp inequalities still persist around the world, says a new United Nations report.