27 May 2014
Despite a slower pace recently on implanting the aims of the European Union-led political dialogue between Belgrade and Pristina, a senior United Nations official told the Security Council today the two sides have “narrowed their remaining differences,” and that he hopes once elections are complete in Kosovo, the dialogue will resume without delay.

“During the reporting period, the pace of implementation of last year's historic agreements was somewhat affected by the holding of early parliamentary elections in Serbia, and the preparations for the forthcoming early legislative elections in Kosovo,” said UN Secretary-General Ban Ki-moon’s Special Representative, Farid Zarif, told the Security Council.

Mr. Zarif, who was presenting Mr. Ban’s latest report to the 15-member body, heads the UN Interim Administration Mission in Kosovo (UNMIK), set up in 1999 to run Kosovo after North-Atlantic Treaty Organization (NATO) forces drove out Yugoslav troops amid deadly fighting with the majority ethnic Albanian population there. Kosovo declared independence from Serbia in February 2008, but Serbia does not recognize the declaration.

In April 2013, Pristina and Belgrade reached a European Union (EU)-facilitated Agreement of Principles Governing the Normalization of Relations, and Mr. Zarif welcomed a series of political developments since then, including in the last few months with Serbia’s successful 16 March elections and formation of a new Government on 27 April. The new elections for the Kosovo Assembly are set to be held on 8 June, with campaigning to begin tomorrow.

“I take this opportunity to call on all Kosovo residents, particularly members of the Kosovo Serb community, to take part in the forthcoming elections and exercise their democratic franchise,” he said.

Despite a slower pace of implementation of the 19 April 2013 agreement, the parties have narrowed their remaining differences, including on the structure and staffing of the judiciary in northern Kosovo. An additional indicator of progress is the operational capability of the Kosovo Police in northern Kosovo. The total number of former Serbian Interior Ministry personnel integrated into the Kosovo Police under the terms of the 19 April agreement has now reached 284.

“It is hoped that, once the forthcoming electoral process in Kosovo is complete and new authorities are in place, the dialogue will resume without delay and a crucial pending matter – the establishment of the Community/Association of Serb municipalities – will be tackled expeditiously, along with other issues of mutual interest and concern,” Mr. Zarif said.

He went on to note that over the past months, a great deal of effort was made to overcome challenges related to the finalization of Municipal Assembly statutes of the four Serbian majority municipalities of northern Kosovo. On 15 May, the municipal assemblies in that region approved amendments to their statutes, bringing them into compliance with relevant Kosovo legislation, as required by the Ministry of Local Government Administration.

“This is an important step forward in the implementation of the 19 April 2013 agreement and the process of establishing the future Community/Association of Serb-majority municipalities,” he said.

The Mission continued to encourage the various communities in Kosovo to continue working towards greater reconciliation and integration, he continued, noting progress on such important issues as missing persons and recognition of survivors of sexual violence during the conflict. “A common appreciation of the benefits of cultural heritage for all communities in Kosovo will also be an important step forward towards coexistence and reconciliation,” said Mr. Zarif, noting that despite best efforts, such awareness has yet to reach “adequate levels.”

“It is essential that Belgrade and Pristina stay on track towards the full implementation of the agreement of 19 April 2013, he said by way of conclusion, adding that it is equally important to ensure coordinated efforts to make the best use of European and other multilateral and bilateral assistance to local programmes and projects in Kosovo.

This way, the population of Kosovo can fully benefit in building a better life. In this regard, UNMIK will continue to fully engage in Kosovo, in coordination with other international, regional and local partners within its 'status neutral' framework, to make best use of its resources and relations with all communities, he said. 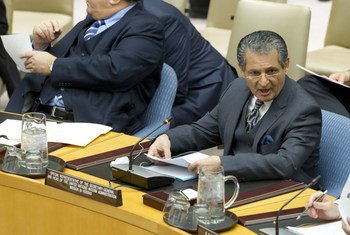 28 April 2014
A senior United Nations official today condemned a recent attack on two vehicles belonging to the European Union Rule of Law Mission in Kosovo (EULEX) and called for ensuring that the perpetrators are brought to justice.