A United Nations human rights expert called today on the Government of Sri Lanka to increase its attention and efforts to prevent exploitation of its nationals working abroad, including by shoring up protections at all levels.

“The Government of Sri Lanka must boost the efforts it has made in recent years in order to prevent exploitation and abuse of Sri Lankans migrating abroad for work, during the recruitment stage, while in service in the destination country, and upon return to the country,” the UN Special Rapporteur on the human rights of migrants, François Crépeau, today urged.

At the end of his first official visit to Sri Lanka, from 19 to 26 May, Mr. Crépeau also called for better monitoring of the recruitment industry by putting in place a comprehensive policy with high standards, improving recruitment agencies’ services and holding them accountable, regulating irregular sub-agents, and reducing costs for migrants.

According to a press release from the UN Human Rights Office (OHCHR), over the years a large recruitment industry has developed in Sri Lanka. Approximately 1.8 million Sri Lankans are working abroad, with great social consequences for migrants and their families.

Remittances have become the key foreign exchange earning source in the country, and a source of economic development and dependency for nearly a third of the population.

“I heard reports of migrants having signed a contract in Sri Lanka which was replaced by another upon arrival in the destination State, with a lower salary and often a different job description,” he said. “Many migrants also report paying excessive recruitment fees, as well as human rights violations in the workplace, including serious abuse and exploitation.”

He noted that, despite recent initiatives, Sri Lankan authorities are often not able to protect Sri Lankan migrants in the destination States. “Cooperation with destination States needs to be enhanced in order to ensure that the rights of Sri Lankans are respected during the whole migration process,” he said.

The majority of Sri Lankan women migrate to work as domestic workers, although the proportion of domestic workers is decreasing. Due to the financial incentives provided, some of these women are sent abroad by their husbands or family members, who expect them to send their salaries back home.

“Due to the worksite being a private household and the informal nature of the work, domestic workers are particularly vulnerable to abuse and exploitation,” Mr. Crépeau warned. “Domestic work is excluded from most of the labour laws in many countries, including in Sri Lanka.”

“I call on the authorities to create income-generating opportunities in Sri Lanka, especially for women, youth and minorities, including in rural areas, in order to ensure that migration is a choice, rather than a necessity,” Mr. Crépeau said. 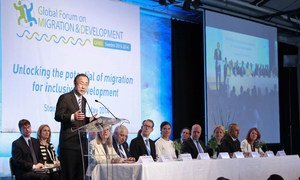 In Stockholm, Ban calls for optimizing benefits of ‘journey of hope’ for migrants, society as a whole

United Nations Secretary-General Ban Ki-moon today called on all countries to rally around the common goal of creating regular, safe and orderly channels of migration and to optimize the benefits of this phenomenon – for those people crossing borders and for society as a whole.