Concentrations of carbon dioxide in the atmosphere have crossed a new threshold, the United Nation's weather agency today confirmed, warning that time is running out to curb rising greenhouse gas emissions.

“This threshold is of symbolic and scientific significance and reinforces evidence that the burning of fossil fuels and other human activities are responsible for the continuing increase in heat-trapping greenhouse gases warming our planet,” the WMO continued.

CO2 levels first reached 400 ppm in April 2012, but this is the first time the monthly average passed the threshold. The agency predicts the global annual average CO2 concentration will cross this threshold in 2015 or 2016.

“Time is running out,” WMO Secretary-General Michel Jarraud said in the statement.

“This should serve as yet another wake-up call about the constantly rising levels of greenhouse gases which are driving climate change. If we are to preserve our planet for future generations, we need urgent action to curb new emissions of these heat-trapping gases.”

The UN is leading the effort towards an international, legally binding climate agreement by the end of next year.

Secretary-General Ban Ki-moon is convening a climate summit on 23 September with leaders from Governments, businesses and civil society to raise the level of ambition, catalyze action on the ground and increase political momentum towards such an agreement.

The overall goal of these efforts is to limit the average temperature increase to two degrees Celsius above pre-industrial times.

The Intergovernmental Panel on Climate Change (IPCC) reported in April that to keep global mean temperature to two degrees Celsius, means lowering global greenhouse gas emissions by 40 to 70 per cent compared with 2010 by mid-century, and to near-zero by the end of this century. 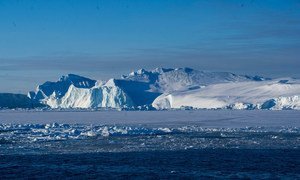 Secretary-General Ban Ki-moon welcomed the findings of a long-awaited United Nations report on the mitigation of climate change released earlier today in Berlin and urged all countries “to act swiftly and boldly” to reach a “global, ambitious and legal [climate] agreement in 2015.”