UN Photo/Eskinder Debebe
Secretary-General Ban Ki-moon (left) with Michel Sleiman, whose term as President of Lebanon ends on 25 May 2014.
25 May 2014

Secretary-General Ban Ki-moon today regretted that the Lebanese Parliament was unable to elect a new president within the timeframe set by the constitution and called on the country's leaders to select a new one “without delay”.

In a statement from his spokesperson, Mr. Ban also urged Lebanese leaders to ensure that the Government would continue to function to address challenges in the country and its international obligations.

“The United Nations remains committed to continued partnership with the Government of Lebanon as it works towards achieving these goals,” Mr. Ban said.

The term of the current head of state, Michel Sleiman, ends today, and the Lebanese Constitution specifies that parliament members must convene to elect a new president before the deadline passes.

Mr. Ban paid tribute to the leadership demonstrated by President Sleiman over the past six years and lauds “his commitment to the unity and stability of Lebanon”, including through the International Support Group for Lebanon, whose members include the UN and the five permanent members of the Security Council, among others, and the implementation of relevant UN resolutions.

Earlier in the month, after meeting with Speaker of the Parliament, Nabih Berri, the UN special coordinator for Lebanon, Derek Plumbly, said the country should avoid a vacuum in the presidency.

“We earnestly hope that members of parliament will engage fully in the coming days to secure the election of a president by the date set in law,” Mr. Plumbly said in Beirut on 12 May. “We stress again the importance of this for Lebanon if it is to continue effectively to address the multiple challenges it faces, and for Lebanon's international partners as they seek to support and assist it.” 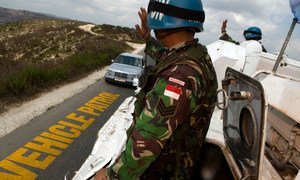 The United Nations Security Council and Secretary-General Ban Ki-moon welcomed Saturday's announcement of the formation of a new Government in Lebanon, and congratulated Prime Minister Tamam Salam “on this important step”.