UN Country Team/Serbia
View of the flooded city of Obrenovac near Belgrade, Serbia, that was evacuated on the second day of crisis on 19 May 2014.

23 May 2014
United Nations humanitarian agencies today raised concerns about landslides and possible water-borne diseases from the worst flooding in Serbia, and Bosnia and Herzegovina in more than a century, which may have disturbed minefields from the Bosnian war.

As relief efforts in the region, including Croatia, continue, the UN World Food Programme (WFP) readied for another airlift of emergency supplies to arrive in the Balkans tomorrow morning.

The UN Children’s Fund (UNICEF) said the number of people directly affected by the floods was now reportedly estimated to be around 1 million, or a quarter of the population in Bosnia and Herzegovina, leaving some 300,000 to flee their homes.

UNICEF spokesperson Christophe Boulierac told reporters at a press briefing in Geneva today that agricultural lands were very affected and there were more than 2,000 landslides that represented the greatest challenge.

Authorities of Bosnia and Herzegovina have reportedly issued strong warnings related to the unearthing of mines and other unexploded devices from the 1992-1995 conflict as a result of the landslides.

Mr. Boulierac also said social service infrastructures such as social health centres and schools had been severely affected by the floods.

In Serbia, 150 schools in the most- affected areas remained closed.

In Bosnia and Herzegovina, UNICEF was taking the lead in water sanitation, hygiene protection and education sectors in cooperation with other partners. The agency had procured locally 300 hygiene kits and had distributed more than 1 ton of chlorine to decontaminate water supplies in the affected areas.

UNICEF, which has mobilized 120 volunteers psycho-social workers, mostly psychologists students, and trained them in collaboration with partners to be deployed to child-friendly spaces, was requesting an initial $3.6 million to meet the immediate and medium term needs of children and women in the affected areas in both countries.

Speaking on behalf of the UN World Health Organization (WHO), Tarik Jasarevic said that waters had begun to recede and people were starting to return home.

As a result, the focus of health authorities in the affected countries was now on surveillance and prevention of water and vector-borne diseases, strengthening the surveillance system and the early warning system for communicable diseases, as well as the recovery of damaged health facilities.

An issue of concern was the significant number of dead animals in waters in the flooded areas. They represented a risk to public health, but the risk was manageable if the right precautions were taken, he said.

“People should not touch dead animals, which should be disposed of in accordance with the advice of public health and veterinary authorities,” he said. “The water with dead animals inside was unsafe to drink or to swim in.”

WFP spokesperson Elisabeth Byrs announced that 75 metric tons of emergency food rations would be transported tonight on a commercial flight from the humanitarian depot in Dubai to Bosnia and Herzegovina, where they would arrive at 6 .am. tomorrow, 24 May.

WFP had said earlier this week that it will launch a $1.5 million operation to respond to immediate humanitarian needs upon a request from the Government of Serbia and in coordination with the authorities there and other UN organizations on the ground.

Also briefing the press, Clare Nullis, for the World Meteorological Organization (WMO), added that her agency was working to assess what damage had been done to meteorological equipment in Bosnia and Herzegovina.

Ms. Nullis said the meteorological services had given “very good” warnings in advance, also through the website called Meteoalarm. In the days ahead of the flooding, Bosnia and Herzegovina, Serbia and Croatia had had alerts so the authorities had been warned. “Without those warnings, the death toll would probably have been much higher,” she said.

Meanwhile, on behalf of the Secretary-General, UN Deputy Secretary-General Jan Eliasson spoke by telephone yesterday with Aleksandar Vucic, Prime Minister of the Republic of Serbia, and on Wednesday with Bakir Izetbegovic, Chairman of the Presidency of Bosnia and Herzegovina, and Ivo Josipovic, President of the Republic of Croatia, regarding the tragic flooding in all three countries.

According to a UN spokesperson, during the calls, The Deputy Secretary-General expressed the UN deepest sympathies and solidarity with the people of the affected countries. He commended the countries' efforts and mutual cooperation to address the consequences of the floods and underscored the Organization’s readiness to provide further assistance as needed. 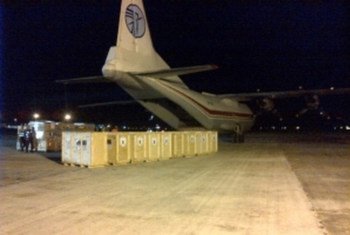 20 May 2014
As the United Nations and its humanitarian partners ramp up disaster response in the Balkans, where heavy rains have led to massive floods and devastating mudslides, Secretary-General Ban Ki-moon has expressed concern for affected populations in Serbia, Bosnia and Herzegovina and Croatia desperate for fresh water, medicines, and other basic necessities.