OHCHR
Cécile Pouilly, spokesperson for the Office of the High Commissioner for Human Rights.
23 May 2014

The United Nations human rights chief has voiced her “very serious concerns” about a recent incident involving the killing of two Palestinian teenagers in the occupied West Bank.

Navi Pillay has written to the Israeli Permanent Representative to the UN in Geneva concerning the 15 May incident, her spokesperson Cécile Pouilly told reporters in the Swiss city.

Israeli security forces allegedly shot and killed the two Palestinian minors – aged 16 and 17 – taking part in a demonstration in Beituniya commemorating the 66th anniversary of what Palestinians call “Nakba day.”

The initial findings of a team on the ground from the Office of the High Commissioner for Human Rights (OHCHR) indicate that the teenagers presented no direct threat at the time that they were killed.

“The killings may amount to extrajudicial executions under human rights law as well as wilful killings under international humanitarian law,” said Ms. Pouilly.

She stated that while OHCHR welcomes reports that an investigation into the incident has been opened, it called for the probe to be “prompt, thorough, effective, independent, impartial and transparent.”

“We also urge Israel to make public the findings of this investigation and any steps regarding accountability that are taken.”

OHCHR noted that the killing comes amid a series of incidents involving the excessive use of force by Israeli security forces in the West Bank, as reported in the High Commissioner’s last report to the Human Rights Council.

“Our Office has repeatedly raised its concerns about the excessive use of force by Israeli security forces and the lack of accountability for such incidents,” Ms. Pouilly said, adding that any use of force by the Israelis must be in accordance with the Basic Principles on the Use of Force and Firearms. 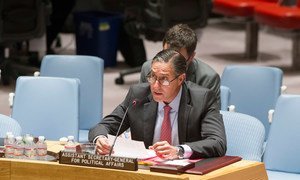 Briefing the Security Council today on what he called an “impasse” in talks between Israelis and Palestinians, a top United Nations political official said it was critical to restart negotiations, but just as important for the parties to consider paths to progress, before talks resume.