UN Photo/Paulo Filgueiras
Ivan Šimonović, Assistant Secretary-General for Human Rights, speaks to journalists following his closed-door briefing to the Security Council on the human rights situation in Ukraine. Mr. Šimonovic was in Ukraine from 14-19 May on the UN Human Rights Monitoring Mission (HRMMU).

21 May 2014
The southern and eastern regions of crisis-racked Ukraine are now awash in weapons and the scene of numerous cases of illegal detentions and abductions, a senior United Nations human rights official warned today, noting that he had discussed with the parties some rights-based and humanitarian de-escalation measures.

"The human rights situation in the east of the country has worsened. There are more arms being used as well as numerous violations being committed,” Ivan Šimonović, Assistant Secretary-General for Human Rights, told reporters following his briefing to the Security Council on his latest report on the situation in the country as well as his recent visit to Kyiv and strife-torn Donetsk and Odessa.

The 36-page report was released on 16 May and is the second to be produced by the UN Human Rights Monitoring Mission, based in five Ukrainian cities, and covers the period from 2 April to 6 May. It documented an “alarming” deterioration of the human rights situation in eastern Ukraine, including serious problems emerging in Crimea, citing numerous examples of targeted killings, torture and beatings, intimidation and some cases of sexual harassment, committed mostly by anti-Government groups.

“As a result of violence in the east and south of the country 127 people have died,” said Mr. Šimonović today, echoing the report’s findings of illegal detentions and abductions, especially affecting journalists as well as members of the electoral commissions, “which make elections in the east more difficult."

Continuing, he said that in the east of the country, aprat from security challenges, the situation has worsened due to common criminality and its rise. In addition, social and economic rights are being affected, although social services do work “but with some disruptions.” Yet, there is a serious danger that such services could break down, and if the overall situation deteriorates further, there is a likelihood that such a breakdown could spark a massive outpouring of people from the region.

As for the situation in Odessa, where reportedly clashes at a trade union building in the Black Sea city sparked a fire that killed and wounded dozens of people earlier this month, Mr. Šimonović said that what seems to be “beyond doubt is now the number of victims: 48 victims – six of them – and all of them were among pro-Ukrainians, died from gunshot wounds.”

“That happened previously during conflicts between the two groups in the centre of the city,” he said, explaining that the other victims were anti-Government protesters that were either in the Trade Union building that were affected by the fire, or people who were jumping from the building to escape the consequences.

“About [the] causes of the fire, it is being examined and it's very technical, however, it is also beyond doubt that Molotov cocktails have been thrown by both sides, flying from the building and into the building," he said, telling reporters that there were five investigations under way on the events, including those being carried out by national authorities in Kyiv and by independent bodies.

Asked whether the dire conditions he had spoken of were the right atmosphere for the holding of elections, he said “it is certainly not a favourable climate” but the UN human rights team was not involved in the actual polls. “We observe violations related to elections.”

In that regard, he said that a “striking example” had been the abduction of members of the electoral commissions and “intimidation of [those officials], which negatively impacts the possibility of organization elections in the east of the country. 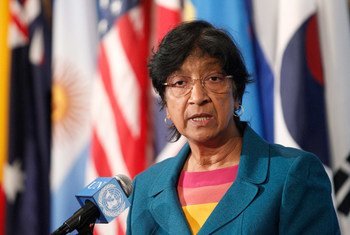