The Global Programme for Combatting Wildlife and Forest Crime will be implemented over the next four years and is an important step towards building Government capacity to prevent and combat such crime on a regional, national and local basis. It will also raise awareness to contribute to the reduction of demand for wild fauna and flora.

“The emergence of this Global Programme shows just how much this critical issue has come to the fore in recent years,” commented UNODC Executive Director Yury Fedotov, who emphasized that the initiative highlights a serious and growing problem and one which UNODC is in a unique position to help fight.

The adoption of the Global Programme follows the 23rd Commission on Crime Prevention and Criminal Justice which concluded last week in Vienna. During its meeting, the Commission called for more work to be done on tackling environmental crime, and introduced a draft resolution aimed at strengthening targeted crime prevention and criminal justice responses to combat illicit trafficking in forest products.

The development of the Global Programme comes amid increasing recognition that responding to the threat posed to wildlife and forests is no longer purely a conservation issue. With a growing understanding that organized crime is a key factor driving the unprecedented growth of this cruel and illicit trade, the need to tackle it from this angle is ever more urgent.

In this regard, and drawing on UNODC’s ability to assist with law enforcement and criminal justice concerns, the Global Programme will support a number of areas such as building legislation to address this crime, strengthening investigative, prosecutorial and judicial capacities, and combating related issues of money-laundering and corruption. It will also support Member States in their efforts to introduce livelihoods to affected communities.

“By working in a coordinated, global manner that allows us to complement existing initiatives by our partners, I am confident that we can help contribute to real change at both the supply and demand side” said Mr. Fedotov.

UNODC says that wildlife and forest crime present a particularly devastating form of organized crime. The number of tigers in the world, for example, has plummeted from about 100,000 a century ago to approximately 3,000 today, and they continue to fall with an average 110 tigers killed every year.

Further, the rhino population is under threat with three of the five living rhino species listed as “critically endangered” on the International Union for Conservation of Nature (IUCN) “Red List.” In South Africa, home to 90 per cent of Africa’s rhino population, 1,004 rhinos were killed in 2013 – a devastating climb from 2003 when 22 rhinos were killed. Meanwhile across Africa it is estimated that over 20,000 elephants are poached annually for their ivory.

There are also strong links to other forms of crime. Says UNODC. Fraud, money laundering and corruption are all frequently associated with this crime, and the existing modus operandi and routes used for the trafficking of drugs, people and firearms are employed by traffickers of fauna and flora.

It is also a major funding source: in East Asia and the Pacific alone – a region particularly vulnerable to timber trafficking – criminal groups make around $23 billion annually from wildlife and forest crimes. This constitutes a large part of the $90 billion a year that is generated from transnational organized crime in the region collectively, according to UNODC. 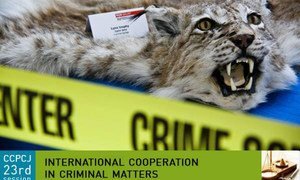 Urging the international community to “come together at the highest political level” to halt the escalation of wildlife and forest crime, the United Nations crime chief said today that the $8-$10 billion reaped annually from this “ruthless trade” ranks it alongside the trafficking of human beings, arms and drugs in terms of illicit profits.