WFP/Pietro Sannipoli
WFP scales up emergency response to flood victims in the Balkans.

20 May 2014
As the United Nations and its humanitarian partners ramp up disaster response in the Balkans, where heavy rains have led to massive floods and devastating mudslides, Secretary-General Ban Ki-moon has expressed concern for affected populations in Serbia, Bosnia and Herzegovina and Croatia desperate for fresh water, medicines, and other basic necessities.

“More than 70,000 people have been evacuated and more than 50 have lost their lives in Bosnia-Herzegovina, Serbia and Croatia,” said a statement issued this afternoon by his spokesperson in New York, which added that people urgently need drinking water, food, tents, and medical supplies.

Thousands of homes are without water and electrical power or are only reachable by boat, and, according to the statement, Mr. Ban notes that the UN and partners are working closely with national authorities, supporting coordination and assessment efforts and providing aid and equipment including water purification units, hygiene kits and other emergency supplies.

“The Secretary-General thanks UN Member States for their prompt response, including relief teams and civil-military support, the statement concludes, adding that the Organization stands ready to mobilize further humanitarian support if requested.

Briefing reporters earlier today in Geneva, Elisabeth Byrs, spokesperson for the UN World Food Programme (WFP), said the agency was able to launch its operations in the affected Balkan countries less than 36 hours after the floods began. For example, WFP had been able to quickly fly supplies into Serbia with help from the UN humanitarian response depot in Brindisi, Italy.

Specifically she said the aircrafts, provided by the Italian and Norwegian Governments, had carried, among other items, 24 generators, 66 water containers, three water purification equipment systems and 10 boats required to reach the affected people.

Ms. Byrs said another aircraft is set to leave from another UN depot in Dubai and would transport 75 tons of high-energy biscuits (HEB), “a strategic stockpile that the affected people could immediately eat.” She added that WFP had dispatched logistics and nutrition experts who would accompany a team of disaster experts sent to the region by the UN on 19 May. Additional logistical specialists were being deployed in the affected area.

“Following an official Red Cross request to assist 7,000 flood-affected persons in Serbia, the WFP will distribute 100g of HEB per person per day for an initial period of 10 days as a complement to other food items,” she added.

Yesterday, WFP dispatched a flight to Tuzla, in Bosnia-Herzegovina, with tents and water containers and purification equipment from the Norwegian Government.

The agency has reported that some 600,000 people could ultimately be affected by the floods “following the heaviest rains the Balkans have witnessed in 120 years.”

Also briefing in Geneva, Tarik Jasarevic of the UN World Health Organization (WHO), said the regional office for Europe is in contact with the Health Ministries of Bosnia and Herzegovina, Croatia and Serbia, providing public health advice on what steps the countries might take in response to the emergency and what individuals can do to protect their lives and health.

In the meantime, he said, WHO is sending water and sanitation experts to Serbia to work on planning and providing advice on health procedures to follow when people return to their homes.

“WHO was also…focused on ensuring that public health authorities are well prepared with plans to do surveillance and prevention of common diseases,” said Mr. Jasarevic.

In face of wildfires, UN disaster agency calls for global cooperation on prevention 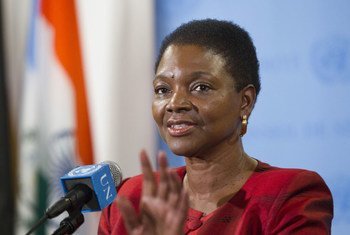 19 May 2014
Deeply concerned by the devastating floods in the Balkans – days of rainfall have reportedly submerged entire villages and triggered landslides across the region – the United Nations Emergency Relief Coordinator is rallying the international community to provide speedy assistance that can help save lives and put people on the road to recovery.