Crises in Ukraine, Syria top agenda at meeting between Ban and Russia’s Putin

With Ukrainians preparing to elect a new president on Sunday, United Nations Secretary-General Ban Ki-moon today sat down with Russian President Vladimir Putin, with whom he also discussed a long-overdue political solution in Syria and other challenges to international peace and security.

The two officials met on the sidelines of the Fourth Summit of the Conference on Interaction and Confidence Building Measures in Asia (CICA). The two-day conference, which is attended by many of the regional leaders, is themed around increasing dialogue, mutual trust and collaboration to build a new Asia.

“The Secretary-General and President Putin agreed that the crisis [over Ukraine] can only be resolved politically and through an inclusive political dialogue,” said a UN spokesperson in New York, updating reporters on Mr. Ban’s activities as he continues a week-long visit to China.

A presidential election is scheduled to be held in Ukraine on 25 May despite waves of violence in the eastern and southern portions of the country. The UN chief today voiced his support for the polls, saying they are “an opportunity to move forward towards long-term peace and stability” in Ukraine.

Among other topics on the agenda of their meeting in Shanghai, Mr. Ban and Mr. Putin discussed opportunities for a political solution in Syria and the urgent need to alleviate the humanitarian situation there with more than 9.3 million people urgently in need of aid. The conflict, which began in March 2011, has led to well over 100,000 deaths, and more than 680,000 people injured.

The Secretary-General also used the meeting as an opportunity to reiterate his invitation to Mr. Putin and other world leaders to attend his climate summit this September in New York. The summit is meant to create momentum for a legal agreement on climate change by the end of next year.

Mr. Putin met with the UN chief in the midst of a deadly train collision back in Moscow. Mr. Ban has offered his condolences and wished those injured in today’s incident a speedy recovery.

Among the other dignitaries attending the CICA is President Mamnoon Hussain of Pakistan, with whom Mr. Ban spoke earlier in the day.

They discussed “the security and human rights situation in Pakistan, as well as the country’s relations with Afghanistan,” according to a UN spokesperson.

During the meeting, the UN chief praised Pakistan’s contribution to peacekeeping operations. Pakistan is in the top three countries contributing troops and police to the missions.

Also today, Mr. Ban met with Hi Huai Bang, President of the China Development Bank. Both of those meetings focused on the potential of investment to spur action on climate change and sustainable development, according to a spokesperson.

The UN chief began his day in Beijing, where he visited the headquarters of Xinhua News Agency. He later held talks with Ding Xuedong, chairman of the China Investment Corporation, the country’s sovereign wealth fund.

While in Beijing, Mr. Ban met last night with Prime Minister Li Keqiang to whom he commended China’s “active, growing and crucial role” in addressing sustainable development and other global challenges. 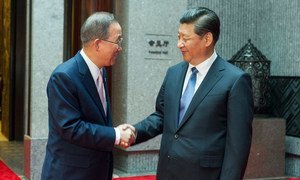 The partnership between the United Nations and China was in the spotlight today in Shanghai where just-arrived Secretary General Ban Ki-moon met with President Xi Jinping and Minister of Foreign Affairs Wang Yi before outlining key global challenges at the city’s premiere institute for the study of international politics, economy and security strategy.