Following the release of the report produced by her 34-member monitoring team in Ukraine, UN High Commissioner for Human Rights Navi Pillay called on “those with influence on the armed groups responsible for much of the violence in eastern Ukraine to do their utmost to rein in these men who seem bent on tearing the country apart.”

The 36-page report is the second to be produced by the UN Human Rights Monitoring Mission, based in five Ukrainian cities, and covers the period from 2 April to 6 May.

While noting that many peaceful rallies and demonstrations continue to take place in Ukraine, the report describes “an increasing tendency in some critical urban areas for rallies of opposing groups to be held simultaneously, often leading to violent confrontations.”

It also notes “repeated acts of violence against peaceful participants of rallies,” mainly those in support of Ukraine’s unity. “In most cases, local police did nothing to prevent violence, while in some cases it openly cooperated with the attackers,” said a news release on the report.

It lists numerous specific examples of targeted killings, torture and beatings, abductions, intimidation and some cases of sexual harassment – mostly carried out by well-organized and well-armed anti-Government groups in the east.

The report also draws attention to missing persons, including 83 still unaccounted for after disappearing during the events related to the original “Maidan” protests in the capital, Kyiv. In the east, there has been a worrying rise in abductions and unlawful detention of journalists, activists, local politicians, representatives of international organizations and members of the military, the report says.

While some have subsequently been released, the bodies of a number of others have been dumped in rivers or other areas, and some remain unaccounted for. The problem has been especially marked in and around the town of Slovyansk, in the Donetsk region, with a group called the ‘Slovyansk self-defence unit’ heavily implicated.

The report also notes cases when the State Security Service and army units operating in the east have been accused of killing individuals and of being responsible for forced disappearances.

“Security and law enforcement operations must be in line with international standards and guarantee the protection of all individuals at all times,” the report says, adding that “law enforcement bodies must ensure that all detainees are registered and afforded legal review of the grounds of their detention.”

The report draws particular attention to the deteriorating climate facing the media in eastern Ukraine, noting that journalists, bloggers and other media personnel either based in the region, or visiting, are facing “increasing threats and acts of intimidation, including abduction and unlawful detention by armed groups.”

There are numerous examples of harassment, intimidation and blocked broadcasting in eastern Ukraine and especially in Crimea, where a number of radio and TV stations have had to cease broadcasting altogether.

The report notes numerous difficulties arising from the fact that “the legislation of the Russian Federation is being enforced on the territory of Crimea,” which is creating difficulties for Crimean residents given the many differences with Ukrainian laws.

One example concerns the halting on 6 May of the opioid substitution therapy programme that had been available to HIV/AIDS patients in Crimea as well as in the rest of Ukraine. “The majority of former OST patients now face deterioration in their health condition due to the fact that this treatment has been curtailed,” the report states.

The report highlights a number of other emerging problems in Crimea, especially in relation to the Crimean Tatars and minorities, including alarming developments surrounding the issue of citizenship; the freedom of movement of their leaders; cases of physical harassment; restrictions on Crimean Tatar media; and fears of religious persecution of those who are practising Muslims. Already, more than 7,200 people from Crimea – mostly Tartars – have become internally displaced in other areas of Ukraine.

The High Commissioner urged all Ukrainian political leaders to avoid any actions that would further inflame the situation, noting that the country’s population should be allowed to vote on their future in a peaceful and secure environment during the elections scheduled for 25 May.

“Free, fair and transparent presidential elections – in line with relevant international standards – are an important factor if tensions are to be reduced and law and order restored, which of course is essential for the peaceful development of the country and all its inhabitants.

“Instead, the continuing rhetoric of hatred and propaganda, coupled with killings and other acts of violence, is fuelling the escalation of the crisis in Ukraine,” she stated. 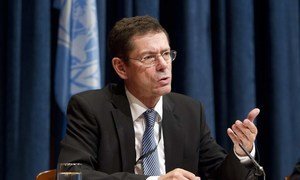 United Nations Assistant Secretary-General for Human Rights, Ivan Šimonovic, announced today the immediate deployment of a UN monitoring team throughout crisis-torn Ukraine to help establish the facts surrounding alleged human rights violations, including in Crimea, and serve to de-escalate tensions in the country.