Drought and ongoing conflict are not only adding pressure to Syria’s already dire food security situation, but also increasing the need for imports and driving up prices, according to the latest outlook issued by the United Nations Food and Agricultural Organization (FAO).

“The pressure continues to mount on displaced families and other vulnerable farmers, threatening long-term consequences for their food security, health and economic survival,” stressed Eriko Hibi, the FAO Representative in Syria.

FAO warned that the production of wheat and barley – the country’s two most important food crops – may be severely reduced.

“The total area planted with wheat is estimated to have declined by about 15 per cent as compared with the average of recent years and wheat production at an expected 1.97 million tonnes for 2014 – some 52 per cent below the average for the 2001-2011 period,” stated the UN agency.

FAO released its latest food security outlook for Syria through its Global Information and Early Warning System as farmers were preparing to harvest winter grains over the next few weeks. The country brief was based on satellite imagery, field reports and information provided by the Ministry of Agriculture and Agrarian Reform of Syria and other sources.

“Rainfall picked up in March and early April as winter crops reached maturity, but an exceptionally dry January-February period had already affected crops in the crucial establishment and growth phases,” reported FAO.

Meanwhile, significant rainfall deficits ranging from 55 to 85 per cent in some areas – from October 2013 to end-April 2014 – kept cumulative rainfall well below seasonal average. This weighs heavily on crop yield projections and rangeland conditions across vast agricultural areas in the northwest of the country,” said the UN agency.

At the same time, the situation in Quonaitra, Al-Ghab, Tartus, Lattakia, and Idleb remained at the drought “warning” phase – with cumulative rains below 50 per cent of the seasonal average.

The changing weather conditions, coupled with the impact of the conflict, were expected to increase the gap between local production and domestic food requirements this year. According to FAO, “this is expected to result in increased food price inflation, loss of employment and disruptions in markets and trade activities.”

Agricultural production suffered for a number of reasons, including declining availability and higher prices of agricultural inputs; damage and destruction of irrigation infrastructure and other farm equipment – including storage facilities; the disruption of markets; the abandonment of agricultural lands; and power shortages and the lack of other services and resources.

Food shortages have also pushed up import requirements, causing cereals and other food prices to climb by 108 per cent in November 2013, compared to the previous year.

“FAO and its partners have been able to assist families in the agriculture sector to protect their livelihoods,” underscored Mr. Hibi, adding “while this can provide desperately needed food and income, we must work with farmers, the Government and all stakeholders to do much more – and to act even more quickly.”

The UN agency is also gearing up for next winter’s cereal production, hoping to help some 50,000 vulnerable small-scale farming households – approximately 350,000 people – living in crisis-affected areas to cultivate at least one hectare of land each.

“This would enable families to meet their food needs for 12 months and produce a surplus to sell on the market,” flagged the UN agency. 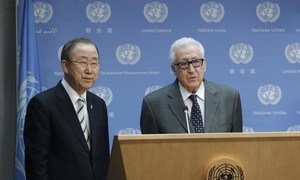 Amidst an international community “hopelessly divided” over how to end more than three years of bloodshed in Syria, Secretary-General Ban Ki-moon today announced that he has regretfully accepted the resignation of Lakhdar Brahimi, the Joint United Nations-League of Arab States Special Representative on the crisis.