Public procurement can contribute to making food systems more fair and sustainable, and help realize the human right to adequate food, according to a United Nations independent expert.

“When sourcing food for schools, hospitals and public administrations, Governments have a rare opportunity to support more nutritious diets and more sustainable food systems in one fell swoop,” Olivier De Schutter said in his final publication to the UN Human Rights Council as the UN Special Rapporteur on the right to food.

“Governments have few sources of leverage over increasingly globalized food systems – but public procurement is one of them,” he concluded, adding that Organisation for Economic Co-operation and Development (OECD) countries spend an average of 12 per cent of their Gross Domestic Products (GDP) on public procurement.

In his report, Mr. De Schutter identified five principles for how Governments should use their public procurement.

He recommends buying locally, and ideally, from small-scale food producers, guaranteeing living wages and fair prices. In addition, he highlights setting specific requirements for adequate food diets, and increasing participation and accountability in the food system.

“It may cost Governments slightly more to source from a range of smaller-scale, sustainable operators than from major suppliers, but the investment is worth it,” the Special Rapporteur said.

For example, data on United Kingdom school feeding programmes suggests a return of 3-to-1 for additional spending on sustainable and local procurement.

Another study estimates that the total benefits of supplying 50 million African school-children with locally produced food could reach around $1.6 billion per year. 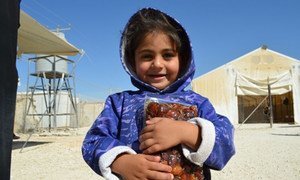