In Stockholm, Ban calls for optimizing benefits of ‘journey of hope’ for migrants, society as a whole

UN Photo/Paulo Filgueiras
Secretary-General Ban Ki-moon (left, at lectern) addresses the opening of the Global Forum on Migration and Development in Stockholm, Sweden.
14 May 2014

United Nations Secretary-General Ban Ki-moon today called on all countries to rally around the common goal of creating regular, safe and orderly channels of migration and to optimize the benefits of this phenomenon – for those people crossing borders and for society as a whole.

“Migration should be a journey of hope – not a perilous gamble in which migrants and their family members risk their lives and livelihoods. We must find concrete solutions,” Mr. Ban said in his remarks at the Global Forum on Migration and Development, which opened in Stockholm.

More than one in thirty people worldwide is a migrant, the Secretary-General noted, adding that migration is a critical issue that affects all countries.

“Our communities have much to gain from migration when it is managed properly – and much to lose when it is not,” he stated.

“I call on all countries to rally around the common goal of creating regular, safe and orderly channels of migration. Together, we can show that when we promote and protect the human rights of migrants and their families, regardless of their migration status, we benefit all people around the world.”

Mr. Ban stressed the importance of grounding all migration policies firmly in fundamental rights. This means protecting migrant workers from discrimination, ensuring the rights of migrant domestic workers and protecting men, women and children from abuse.

He also voiced serious concern about the crises unfolding in the Mediterranean and elsewhere. Just a couple of days ago, at least 17 people drowned after a smuggling boat carrying migrants and refugees sank in international waters between Italy and Libya. “The loss of life is unacceptable. We must stop the loss of migrants’ lives at sea and on land, wherever that may occur,” he said.

“We have also sought to do more to alleviate the suffering of vulnerable migrants stranded in crisis situations – and respond to their desperate needs,” he added.

The Secretary-General said he is especially concerned about the administrative detention of migrants, including very young children, saying that such actions can impact negatively on the rights of migrants.

“We must always stay true to universal values and not allow opportunists to divide societies by exploiting fear and hatred for political gain. Especially in times of high unemployment, we must be vigilant against the tendency to scapegoat migrants.”

He also cited the need to work more closely with non-governmental organizations, civil society and other partners to uphold the rights of migrants, including their right to decent working conditions and fair wages.

“We must redouble our efforts to address negative stereotypes and combat discrimination of any kind,” he added. “Let us also strengthen our ability to monitor racist and xenophobic rhetoric and counter it with hard facts, understanding and tolerance.”

He noted that the Forum comes at a very important time as Member States are working on shaping the development agenda beyond 2015, the deadline for reaching the anti-poverty targets known as the Millennium Development Goals (MDGs).

“Your voices can impress upon those drawing up the post-2015 framework the great value of leveraging migration to generate economic, social and environmental progress,” Mr. Ban told delegates.

“With compassion, common sense and political will, we can better manage international migration in a coherent, comprehensive and balanced manner. We need to integrate the important links between migration and development in national and international policies. We must advocate for a human rights-based approach to migration policies and practices. All of this will generate great progress for migrants and society as a whole.

“It us up to us, it is up to you, collectively, to optimize the benefits of migration – for those people crossing borders and for society as a whole. The current discussions on the post-2015 agenda provide us with an opportunity to shape a responsive approach to the challenges of migration.”

While in the Swedish capital, Mr. Ban held meetings with Crown Princess Victoria, as well as King Carl XVI Gustaf and Queen Silvia, discussing issues such as the situations in Syria and Ukraine, as well as the challenges of addressing the growing needs of migrants, refugees and displaced persons around the world.

He also held a meeting with representatives of Swedish civil society, as well as a working lunch with Prime Minister Frederik Reinfeldt. Speaking at a joint press conference with the Premier, Mr. Ban called Sweden “a leading champion of the United Nations,” and said he was particularly impressed that at a time of global financial constraint, the country consistently exceeds the UN target for development aid. 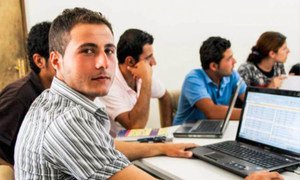 A new report launched today by the United Nations spotlights the significant impact of young migrants on origin, transit and destination countries and communities, as well as the challenges they face, as told in their own voices.