UNICEF/Catianne Tijerina
Many schools have been damaged in the sectarian violence in the Central African Republic and families are still too scared to send their children back to classes.
13 May 2014

The children of the Central African Republic are witnessing terrible violence in what has become a forgotten crisis, a senior United Nations Children’s Fund (UNICEF) official today said, urging the international community to ‘stand up’ and stop the violence as soon as possible.

The children of the Central African Republic are witnessing terrible violence in what has become a forgotten crisis, a senior United Nations Children’s Fund (UNICEF) official today said, urging the international community to ‘stand up’ and stop and help end the crisis as soon as possible.

“You look into their eyes and they are just lost. But it is not just the violence, it is the sheer brutality. Chopping. Maiming,” Souleymane Diabaté, UNICEF’s representative in Central African Republic (CAR), told journalists at UN Headquarters in New York.

Since December 2013, 194 children have been maimed and killed, according to UNICEF figures, including through gruesome beheadings.

“The situation of children in the CAR is very fragile and unpredictable,” said Mr. Diabaté, adding that half a million people are displaced in the country.

Fighting in CAR has taken on an increasingly sectarian nature following a 2012 rebel-led coup and has since become more brutal with reports of ongoing human rights violations and clashes that have left 2.2 million in need of humanitarian aid.

“The entire population of CAR is directly or indirectly affected by the crisis, including the children,” the UNICEF representative said. “It is a nightmare but unfortunately it is all too real.”

“CAR is a forgotten crisis,” he added. “We hear more about Syria, Mali, and now Ukraine.”

Even before the fighting, both the child and maternal death rates in the country where higher than in Somalia during its crisis, Mr. Diabaté said.

The number of children being treated for severe acute malnutrition in the war-torn capital, Bangui, tripled since the beginning of 2014. Almost 680 children during the first quarter of this year were treated at the Bangui Paediatric Hospital, the city’s largest in-patient centre, compared with 214 children last year, UNICEF announced last month warning that more children were likely to suffer in the coming months.

Mr. Diabaté reiterated this concern today, noting also that CAR is surrounded by fragile countries, such as Chad and Cameroon where several children have been paralyzed by polio since October.

In addition, children are particularly at risk for cholera amidst the onset of the rainy season.

“We have already petitioned the necessary medicine and human resources to address any cholera outbreak,” the UN representative said.

The UN agency has requested $62 million for this year to fund its programmes, with $20 million raised so far. 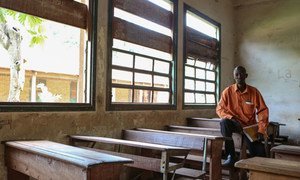 More than half way through the 12-month school year, almost two thirds of schools in the conflict-ridden Central African Republic (CAR) remain closed, according to a recent survey by the United Nations Children’s Fund (UNICEF) and its partners.