Despite recent escalation, full-blown conflict in Ukraine can be averted – Ban

UNDP Kyiv
Ukrainian flags in front of the House with Chimaeras, Kyiv.
12 May 2014

There is still time to avert a full-blown conflict in Ukraine, where the crisis continues to escalate, particularly in the east and south of the country, Secretary-General Ban Ki-moon said today.

“Over the past weeks, there has been much violence and little dialogue,” Mr. Ban told reporters at UN Headquarters. “I call on all those who have sought to undermine Ukraine’s unity, territorial integrity and stability to immediately cease such actions.

“The authorities in Kyiv must also continue to respond to such acts with maximum restraint and within the parameters of Ukrainian law and international human rights principles,” he added.

The Secretary-General’s comments come in the wake of referenda held over the weekend in two more areas of eastern Ukraine, adding to the ongoing tensions in the country.

“There is still time to halt the descent of Ukraine into full-blown conflict,” said Mr. Ban.

He urged all sides to “find a way back” to the spirit of compromise exhibited last month in Geneva, when an accord was reached on a series of steps to de-escalate tensions in eastern Ukraine, and to implement the provisions of that agreement without delay.

Ukrainian officials have announced that the presidential election will be held later this month. It was originally scheduled for May of next year, but was brought forward following the political crisis in the country.

Mr. Ban appealed to all the people of Ukraine to express their grievances and aspirations peacefully, including by casting their ballots in the presidential elections on 25 May. 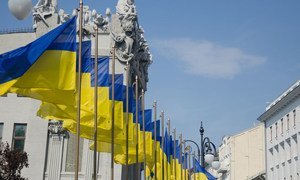 Increasing violence in eastern and southern Ukraine is resulting in more and more death and destruction, the top United Nations human rights official said today, calling on all sides in the conflict to make a greater effort to find a peaceful resolution, particularly ahead of the 25 May presidential election.