On this year's World Migratory Bird Day, the United Nations is spotlighting the role sustainable tourism can play in conserving one of the world's true natural wonders: the spectacular movements of migratory birds along their flyways.

Thanks to an innovative new project being led by the UN World Tourism Organization (UNWTO) and promoted through this year's Day, marked on 10 and 11 May, some of the world's estimated 50 billion migratory birds should soon be able to benefit from sustainable tourism development.

The theme of the 2014 commemoration, “Destination Flyways – Migratory Birds and Tourism,” echoes the UNWTO-led project Destination Flyways. Currently in its preliminary phase, the initiative aims to develop sustainable tourism at destinations along the world's major migratory bird routes.

According to UNWTO, each year, millions of migratory birds set out to travel the world, flying along the same routes, known as flyways. Spanning continents and oceans, and used by myriad bird species, the flyways represent one of the most spectacular and valuable assets of the world's natural heritage.

The initial phase of the project will focus on eight key sites for migratory birds in Africa, Asia and Europe. By providing an adequate framework for sustainable tourism management and diversifying the tourism offer along the routes, Destination Flyways will aim to generate revenue for improved management of biodiversity and spread the benefits of tourism to local communities, while creating attractive experiences for tourists.

"I fully support the global campaign to raise awareness about the threats to migratory birds from habitat destruction, overexploitation, pollution and climate change,” said UN Secretary-General Ban Ki-moon, calling for greater international efforts to restore and preserve migratory birds and the network of sites they need to survive as an important part of the environment on which we all depend.

“Tourism has a major responsibility in advancing biodiversity protection. Every year, millions of tourists are wondered by the world's wild flora and fauna while travelling,” UNWTO Secretary-General Taleb Rifai said, adding that without such enriching experiences, tourism could not be the vehicle for sustainable growth, job creation and poverty alleviation that it is today.

“Many people want to experience nature when they travel and there are millions of people around the world who are particularly interested in observing birds in their natural surroundings,” said Bradnee Chambers, Executive Secretary of CMS.

“Bird-watching is an important component of a global multi-million dollar wildlife-watching industry and provides a significant source of income and employment for a growing number of communities, especially in developing countries,” he added.

By providing an adequate framework for sustainable tourism management, diversifying tourism and channelling its revenue back into the conservation of the project sites and the communities around them, Destination Flyways will work to safeguard the birds' habitats, while creating job opportunities for local communities along the flyways.

One of the eight project sites selected for the Destination Flyways project is Lake Natron, in the remote north of Tanzania near the Kenyan border. Home to 75 per cent of the world's population of the Lesser Flamingo, Lake Natron is the only breeding ground for this species in East Africa.

For Lake Natron, tourism can be a solution for conservation, provided that local communities are involved in its development and implementation and derive tangible benefits from it. It is, therefore, critical to make sustainable tourism a true long-term alternative to other economic activities, such as the proposed mining of soda ash from the lake, about which serious concerns have been raised because of the potential danger to the flamingo population.

“The UNWTO-led Destination Flyways Project, the inspiration for the 2014 World Migratory Bird Day campaign, is a perfect example of how tourism and biodiversity can benefit from each other. On this World Migratory Bird Day, we invite all to help us turn one billion tourists into one billion opportunities to protect the world's original long-distance travellers,” said Mr. Rifai.

“As tourism continues to grow, so too will the pressures on the environment and wildlife. Without proper management and protection, as well as investments in greening the sector, thousands of magnificent species will suffer,” said UNEP Executive Director Achim Steiner.

He said that the agency has identified tourism as one of the 10 economic sectors best able to contribute to the transition to a sustainable and inclusive green economy. “The Flyways initiative will help to accelerate the transition to the green economy while protecting tourism – a major source of revenue for many communities – and the thousands of species it spotlights,” he added. 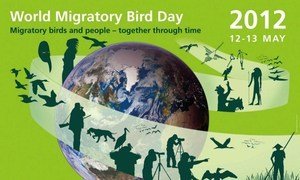 Bird-watching, a popular hobby around the world, can present significant economic opportunities for countries through sustainable tourism, the United Nations environment agency said today, stressing that States should increase efforts to support this growing industry.