Marc Tamara, French teacher at the Etat des Rapides High School in Guango after it was looted. ©UNICEFRCA/Matas/2013
9 May 2014

More than half way through the 12-month school year, almost two thirds of schools in the conflict-ridden Central African Republic (CAR) remain closed, according to a recent survey by the United Nations Children’s Fund (UNICEF) and its partners.

“The education system is literally on its knees,” said Souleymane Diabaté, UNICEF Representative in CAR. “Many teachers have not been paid for months; there are no textbooks; the little infrastructure that existed before the crisis has been damaged.”

Fighting in CAR has taken on an increasingly sectarian nature following a 2012 rebel-led coup and has since become more brutal with reports of ongoing human rights violations and reprisal clashes between largely Christian anti-balaka and mostly Muslim Séléka rebels that have displaced hundreds of thousands of people both inside and outside the country, and left 2.2 million in need of humanitarian aid.

The crisis has also disrupted two school years since the end of 2012 and many families are still too scared to send their children back to classes, UNICEF noted in a news release.

The survey carried out in February paints a grim picture. On average, schools have only been open for four weeks since October 2013 due to the destruction of classrooms, the slow return of teachers to duty posts and delayed payment of teachers’ salaries.

A third of the 355 schools surveyed have been attacked in recent months – struck by bullets, set on fire, looted or occupied by armed groups. Meanwhile, enrolment figures dropped drastically – one in three children who were enrolled in the last school year did not return this year.

“Families, homes, stability – so much has been taken from children during this crisis,” said Mr. Diabaté. “They cannot be robbed of education, their best hope for a better and more peaceful future.”

In areas where insecurity has hindered the resumption of educational activities, including the capital Bangui, UNICEF and partners set up nearly 120 temporary learning spaces where up to 23,000 children and adolescents have the opportunity to learn, play and receive psychosocial support.

UNICEF’s education programmes remain grossly underfunded, the agency warned. Only $3 million has been received so far out of a total $10 million needed to help children resume their learning. 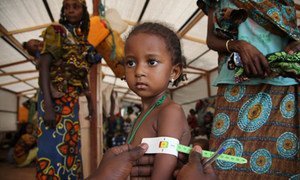 The number of children being treated for severe acute malnutrition in the Central African Republic’s war-torn capital, Bangui, has tripled since the beginning of 2014, the United Nations Children’s Fund (UNICEF) confirmed today, predicting that more children are likely to suffer in the coming months.