The United Nations human rights office today voiced concern at renewed violence in Venezuela, and at the reported excessive use of force by the authorities in response to protests.

According to the Office of the High Commissioner for Human Rights (OHCHR), Venezuelan troops rounded up more than 200 youth movement protesters who had been camping peacefully outside the UN Development Programme (UNDP) offices in Caracas and other parts of the city on Wednesday night and early Thursday.

Rupert Colville, OHCHR spokesperson in Geneva, told reporters that a total of 243 people were arrested, according to official figures.

“The Government has claimed that the camps were being used as bases for staging violent protests, and that they had found molotov cocktails, arms and drugs there,” he said.

The majority of those detained, who include 18 minors and one pregnant woman, have reportedly been taken to Tiuna military premises. Lawyers and families have complained about lack of information about the whereabouts of those detained as well as lack of access to them.

Mr. Colville said that hundreds of other demonstrators took to the streets to protest against the arrests of the youths and the dismantling of the camps.

“Barricades were set up and roads blocked. A policeman was shot dead and three others reportedly injured during clashes. Protesters were also reportedly injured. Further arrests were reported throughout Caracas yesterday evening.”

OHCHR also voiced concern at reports of violence and attacks, usually started by armed individuals, in and around Venezuelan universities, which have been taking place since the beginning of the week.

The Library of the Fermin Toro University in Barquisimeto was set on fire, and police used rubber bullets and tear gas to disperse demonstrations inside and outside the premises of the Catholic University in Puerto Ordaz.

“We unequivocally condemn all violence by all sides in Venezuela. We are particularly concerned at the reported excessive use of force by the authorities in response to protests,” said Mr. Colville.

“We therefore reiterate the High Commissioner’s call to the Government to ensure that people are not penalised for exercising their rights to peaceful assembly and to freedom of expression and for sustained and inclusive, peaceful dialogue based on Venezuela’s human rights obligations,” he said, adding that OHCHR remains available to support efforts to this end. 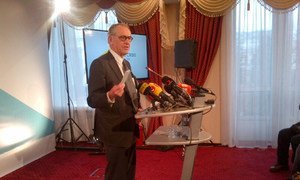