The United Nations envoy on sexual violence in conflict today voiced her disappointment that only two people were convicted of rape during the recent trial of 39 soldiers and officers charged with committing crimes in and around the town of Minova in eastern Democratic Republic of the Congo (DRC) two years ago.

In the mass rape trial, which concluded on 5 May, the Operational Military Court in North Kivu condemned 26 members of the DRC armed forces (FARDC), including two for rape, one for murder and most of the rest on more minor charges such as looting and disobedience. Fourteen officers were acquitted.

The Secretary-General’s Special Representative on Sexual Violence in Conflict, Zainab Hawa Bangura, took note of the conclusion of the trial and expressed her disappointment at the verdict.

“The Special Representative regrets that the verdict does not reflect the magnitude of the crimes of sexual violence that were committed and fails to do justice to all victims who had the courage to bring this case to court,” said a statement issued by Ms. Bangura’s office.

Ms. Bangura saluted the bravery of the survivors and urged DRC authorities to pay reparations and take immediate measures “to protect survivors, witnesses, and the legal counsel who worked tirelessly to seek justice for the hundreds of survivors, as well as for human rights defenders who advocated for accountability.”

A UN report on the incident detailed harrowing victim testimony and eyewitness accounts of mass rape and other gross violations of human rights perpetrated by the FARDC between 15 November and 2 December 2012 as the soldiers retreated after clashing with M23 rebel forces in North Kivu province.

Earlier this week, the Office of the High Commissioner for Human Rights (OHCHR) expressed its disappointment at the ruling, saying that it fell short of the expectations of the numerous victims and confirmed the shortcoming of the country’s justice system. 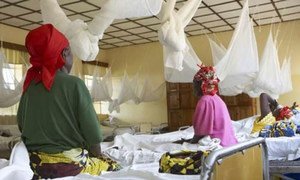 Disappointed by the ruling of a Democratic Republic of Congo (DRC) military court which acquitted close to half of the 39 Congolese soldiers accused of mass rape in 2012, the United Nations Human Rights Office (OHCHR) said today the decision fell short of the expectations of the numerous victims and confirmed the shortcoming of the country’s justice system.