In wake of abductions, Ban to send high-level envoy to Nigeria to discuss UN support

Rosie Collyer/IRIN
Suleiman Aliyu, headmaster of Future Prowess Islamic Foundation, a private school in Maiduguri, Nigeria. Schools have been attacked by Boko Haram and attendance is down.
8 May 2014

Secretary-General Ban Ki-moon today voiced his deep concern at the fate of the recently kidnapped schoolgirls in Nigeria during a phone call with the country’s President, Goodluck Jonathan, who has accepted the United Nations chief’s offer to send a high-level envoy to discuss how the world body can support the Government tackle internal challenges.

During the call, Mr. Ban expressed his solidarity with the people of Nigeria, and especially the girls’ families, according to information provided by the Secretary-General’s spokesperson.

The President briefed the Secretary-General on the current state of the search for the 230 girls, who were violently abducted from their school in Borno state in mid-April by Boko Haram militants.

“The President accepted the Secretary-General’s offer to send a high-level representative to Nigeria to discuss how the United Nations can better support the Government’s efforts to tackle the internal challenges.”

In a separate statement, the Secretary-General said he shared the anguish of the families of the girls and the people of Nigeria at this “traumatic” time.

“The Secretary-General reiterates that the targeting of children and schools is against international law and cannot be justified under any circumstances,” said the statement.

Also today, a group of UN and African human rights experts called on Boko Haram to immediately release the abducted girls, and urged the Nigerian Government to take all necessary measures to ensure their safe return and to hold the perpetrators accountable.

“Ensuring the return of the girls and holding perpetrators accountable will contribute to ending impunity. It will also send a strong message that Nigeria places paramount importance on the protection of girls,” the experts said in a news release.

Boko Haram, whose name stands for “Western education is a sin,” has been carrying out targeted attacks in recent years against schools, police, religious leaders, politicians, public and international institutions, indiscriminately killing civilians, including dozens of children. 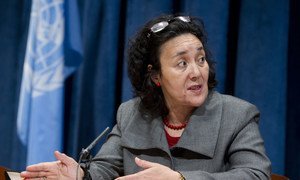 United Nations Secretary-General Ban Ki-moon’s top envoy on children and armed conflict expressed deep concern about the fate of the 230 girls violently abducted from their school in in mid-April by Boko Haram militants in Nigeria’s crisis-riven Borno State, and deplored the group’s reported abduction yesterday of several more girls.