IOM/Conrad Navidad
11 November 2013, Eastern Samar, Philippines: Coconut trees knocked down by the storm, devastating the livelihood of the people in Eastern Samar.

The UN humanitarian agencies and their partners in the Philippines are now prioritizing projects on shelter and livelihoods, while continuing to assist the most vulnerable people with assistance and protection services, he added.

Haiyan is the biggest typhoon recorded in almost a century, and according to the Office for the Coordination of Humanitarian Affairs (OCHA), it killed thousands and affected nearly 9.8 million people, displaced some 4 million people and destroyed 500,000 homes.

Funding for housing is part of the humanitarian community’s Strategic Response Plan (SRP), which at $788 million, is 56 per cent funded, according to the latest figures.

Meanwhile, in the central part of the country, tens of thousands of rice farmers are starting to bring in their harvests, having received certified rice seeds, fertilizer and tools within weeks of the disaster.

“When I saw the extent of the destruction and damage caused by the high winds and storm surge, I thought the situation was hopeless,” said rice farmer Lisa Canaber from Leyte Province, one of the worst-affected areas.

Her family was one of 44,000 to receive farm aid from the Department of Agriculture and the UN Food and Agriculture Organization (FAO).

“Had I not received the certified rice seed to plant in time for the December/January season, I would have needed to rely on external food aid for almost a whole year,” another farmer, Carmen Cinco, told FAO. “I am hopeful now. We are on the way to recovery.”

The agency is also working with coconut farmers who lost some 33 million trees to the storm. With a six to eight year wait for coconut trees to become productive again, the farmers are being given interim support to find alternative sources of livelihood – such as vegetable seeds, farm tools and livestock.

Farmers who relied on fishing are receiving sustainable fishing tools, while FAO is continuing to work with officials and local communities to repair the damaged coastal mangrove ecosystems.

Children are also receiving support to return to school, be immunized and have access to clean water.

“In spite of UNICEF’s [UN Children’s Fund] continued, intense response since Typhoon Haiyan hit six months ago, and clear progress being made, the work is far from complete,” said Lotta Sylwander, UNICEF Representative in the Philippines.

The agency and partners have so far helped to immunize more than 80,000 children, provide a million people with access to safe water, reached 25,000 children with support to help them overcome the traumas they faced, brought children back to school within the shortest possible time and provided 470,000 children with learning materials. 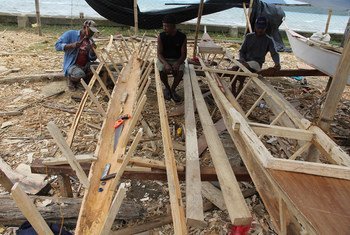 7 April 2014
Voicing concern that the Philippines’ post-typhoon reconstruction and recovery efforts could be undermined by its heavy debt load, a United Nations independent human rights expert today issued a strong call on international creditors to cancel the country’s debt and to provide unrestricted grant aid instead of new loans.