Air quality in most urban areas worldwide that monitor outdoor air pollution fails to meet WHO safety guidelines, putting people at additional of serious health problems, the agency said in a press release issued along with its 2014 urban ambient air quality database.

The agency says the new information calls for greater awareness of health risks caused by air pollution, implementation of effective air pollution mitigation policies, and close monitoring of the situation in cities worldwide.

According to the database, only 12 per cent of the people living in cities reporting on air quality reside in cities where that air quality complied with WHO guideline levels. About half of the urban population being monitored is exposed to air pollution that is at least 2.5 times higher than the levels WHO recommends - putting those people at additional risk of serious, long-term health problems.

In most cities where there is enough data to compare the situation today with previous years, air pollution is getting worse. Many factors contribute to this increase, including reliance on fossil fuels such as coal fired power plants, dependence on private transport motor vehicles, inefficient use of energy in buildings, and the use of biomass for cooking and heating.

“Too many urban centres today are so enveloped in dirty air that their skylines are invisible,” said Dr. Flavia Bustreo, WHO Assistant Director-General for Family, Children and Women's Health.

“Not surprisingly, this air is dangerous to breathe. So a growing number of cities and communities worldwide are striving to better meet the needs of their residents - in particular children and the elderly."

Some cities are making notable improvements - demonstrating that air quality can be improved by implementing policy measures such as banning the use of coal for “space heating” in buildings, using renewable or “clean” fuels for electricity production, and improving efficiency of motor vehicle engines.

“We can win the fight against air pollution and reduce the number of people suffering from respiratory and heart disease, as well as lung cancer,” said Dr. Maria Neira, WHO Director for Public Health, Environmental and Social Determinants of Health.

“Effective policies and strategies are well understood, but they need to be implemented at sufficient scale. Cities such as Copenhagen and Bogotà, for example, have improved air quality by promoting ‘active transport’ and prioritizing dedicated networks of urban public transport, walking and cycling,” she adds.

The report notes that individual cities can take local action to improve air quality and thus go against regional trends. And good air quality can go hand in hand with economic development, as indicated by some major cities in Latin America which meet, or approach, the WHO air quality guidelines.

“We cannot buy clean air in a bottle, but cities can adopt measures that will clean the air and save the lives of their people,” said Dr. Carlos Dora, Coordinator, Interventions for Healthy Environments, WHO Department of Public Health, Environmental and Social Determinants of Health. 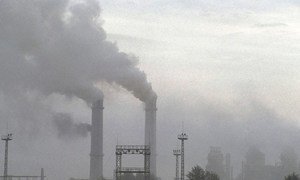