IRIN (file photo, July 2011)
Rape victims receive treatment at the Panzi hospital in Bukavu, Democratic Republic of the Congo.
6 May 2014

Disappointed by the ruling of a Democratic Republic of Congo (DRC) military court which acquitted close to half of the 39 Congolese soldiers accused of mass rape in 2012, the United Nations Human Rights Office (OHCHR) said today the decision fell short of the expectations of the numerous victims and confirmed the shortcoming of the country’s justice system.

Briefing reporters in Geneva, OHCHR spokesperson Rupert Colville said the Office was disappointed in the ruling by the Operational Military Court in North Kivu against the members of the DRC armed forces (FARDC) who were accused of rapes and other crimes committed two years ago in and around Minova, a town in the vast country’s restive east.

According to Mr. Colville, the Court condemned 26 FARDC members, including two for rape, one for murder and most of the rest on more “minor charges” such as looting and disobedience. Fourteen officers were acquitted, he said, adding the UN human rights workers on the ground were still carefully analyzing the judgment.

But in light of what is known so far, he said “the judiciary has not met the expectations of the numerous victims of rape who had fully participated in the trial.”

“The outcome of the trial confirms shortcomings in the administration of justice in the DRC,” as outlined in the recent report on progress and obstacles in the fight against impunity for sexual violence in the country issued by the UN Joint Human Rights Office in the DRC, he added.

He said there is no possibility for appeal, per the Operational Military Court rules of procedure, in contradiction of international standards as well as the Congolese Constitution, both of which guaranteed the right to appeal.

“The crimes perpetrated in Minova and its surroundings…were extremely serious and widespread,” said Mr. Colville, recalling that on 8 May 2013, OHCHR and the UN Mission in the country, known by its French acronym MONUSCO, issued a report on the incident, documenting 135 cases of sexual violence perpetrated by FARDC elements in and around the town of Minova as units had retreated from the front lines.

The report, which details victim and eyewitness accounts of mass rape, killings, arbitrary executions and other gross violations of human rights, also cites M23 rebels for committing atrocities. Yet, it notes that the serious rights violations committed by FARDC soldiers, in particular, were “perpetrated in a systematic manner and with extreme violence” and may constitute international crimes under human rights law, as well as crimes under Congolese criminal law.

“Those responsible for such crimes must know that they will be prosecuted,” UN High Commissioner for Human Rights Navi Pillay said in a statement issued at the time, calling the sexual violence outlined in the report “horrifying” in scale and systematic nature.

The joint investigation attributes poor discipline among soldiers and officers, as well as improper training and inadequate vetting mechanisms for what happened.

The investigation also expresses serious concern about the failure of the Congolese army to protect civilians, which it says stems from a lack of vetting procedures which allowed former rebels to integrate into the national army without verification of the human rights records. 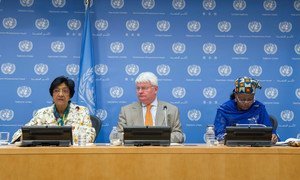 United Nations officials today called on the Government of the Democratic Republic of the Congo (DRC) to step up the fight against impunity for rape and sexual violence, which remain widespread and largely unpunished despite some progress in holding perpetrators accountable.