UNDP Bangladesh/Nasif Ahmed
In Bangladesh, an innovative “disaster resilient village” was built in Shymnagar for a coastal village wiped out after Cyclone Aila.
5 May 2014

The United Nations Office for Disaster Risk Reduction (UNISDR) has announced that it will partner with a California-based supplier of global geographic data to make available new technologies that can help communities and cities visualize disaster risk and take action.

Esri, a world leader in Geographic Information Systems (GIS) technology, and the UNISDR announced their new partnership at the “Abu Dhabi Ascent”, a high-level meeting, co-hosted by Secretary-General Ban Ki-moon with the Government of the United Arab Emirates to generate momentum ahead of the UN chief’s September 23 climate summit in New York.

The Ascent, which began Sunday and wrapped up earlier today two-day brought together Government representatives and leaders from business, finance and civil society to develop proposals for action on climate change.

The new initiative will support the efforts of the 1,800 cities of UNISDR’s Making Cities Resilient Campaign to improve land use and urban planning by providing access to the very latest mapping technology and encouraging the development of new apps for urban resilience.

Responding to Mr. Ban’s call for world leaders to mobilize their most ambitious plans for climate action, the initiative leverages the same technology platform unveiled by the United States Government for American cities last month, UNISDR says in a press release. The maps provided through the partnership establish the foundation for mobilizing larger tangible commitments to disaster risk reduction that will be announced the UN climate talks in September.

“Land use and location of critical infrastructure such as schools and hospitals are key to good planning for all communities, large and small,” said Margareta Wahlström, the head of UNISDR, adding that planners must deal with spatial information for they are to reduce risk and build resilience to disasters.

“This partnership with Esri can help bridge the gap between aspiration and implementation by putting the latest science and technology at the disposal of those who have joined the Making Cities Resilient Campaign,” she concluded. 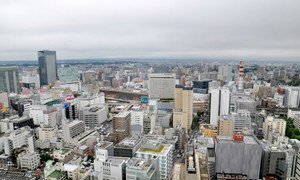 Ahead of Sendai conference, Ban pushes for 2015 global agreement on disaster risk

Disaster risk reduction and climate change are closely linked, Secretary-General Ban Ki-moon today stressed, reiterating to the world community his key priorities through the next year as preparations continue for the 2015 world conference on reducing risk from natural disasters.