Senior United Nations officials today reported a drastic deterioration in the human rights situation in South Sudan, marked by increasing ethnic violence and revenge killings, and urged the Security Council not to simply stand by as the world’s youngest nation plunges deeper into crisis.

“If the parties do not clearly demonstrate their will and intention to end the violence and attacks against civilians, including incitement to commit violence, I believe the Council should consider taking additional measures against the parties to prevent the situation from deteriorating further,” said Adama Dieng, the Secretary-General’s Special Advisor on the Prevention of Genocide.

Earlier this week, Mr. Dieng and High Commissioner for Human Rights, Navi Pillay, who also briefed the Council today, travelled to South Sudan, where a conflict that began in mid-December between pro- and anti-Government forces has left thousands dead. The joint visit came in the wake of the recent mass killings in the towns of Bentiu and Bor.

Mr. Dieng said the brutal attacks in the two towns, on virtually opposite ends of the country, seemed to have “changed the trajectory” of the conflict, and if such attacks are not immediately halted, it could plunge South Sudan into serious violence that could spiral out of control.

Also, there are elements of the current situation that could be categorized as risk factors of genocide and other atrocity crimes, he noted. These include the separation of persons based on ethnicity, as well as the reported use of radio in some areas to spread messages constituting incitement to violence, including sexual violence, against those purported to support the Government.

“All leaders in South Sudan must assume greater responsibility to ensure that those under their authority do not commit serious violations of international human rights and humanitarian law,” stated Mr. Dieng. “They should send strong messages to call for the unity and respect of all South Sudanese, and take immediate measure to end the violence.”

He added that reports of the homogenization of the security forces by both camps are “worrying” in light of the risk of atrocity crimes.

“The perception that those supporting Riek Machar are predominantly ethnic Nuer and those who support President Kiir are predominantly Dinka has heightened the risk that individuals could be systematically targeted on the basis of ethnicity. This polarization is further compounded by reports of exclusion, discrimination on the basis of ethnicity.”

Both Mr. Dieng and High Commissioner Pillay said that the culture of impunity in South Sudan has contributed immensely to the current crisis, and stressed that those responsible for crimes must be held to account.

“Today’s violence in South Sudan is not motivated by the desire to change the country but rather by self-interest goals related to accessing oil wealth and development resources,” Mr. Dieng added. “The international community must not be complicit in this agenda.”

Ms. Pillay voiced similar sentiments, saying: “I fear that South Sudan’s leaders are locked in a purely personal power struggle, with little or no regard for the appalling suffering that it inflicts on their people.”

She noted that the Intergovernmental Authority on Development (IGAD) and regional leaders “share the same outrage” as the rest of the world. “They see the conflict as a showdown between two leaders for political power and the control of oil revenues.”

The High Commissioner, who met with IGAD officials in Ethiopia, said that the regional body is pushing for the quick deployment of the proposed Protection and Deterrent Force, which will provide protection for the monitoring and verification teams responsible for monitoring the implementation of the cessation of hostilities signed in January.

“The head of IGAD sees this as, in his words, ‘a game changer’ in reducing the ongoing violence,” she stated. “Despite egregious violations of the cessation of hostilities by both parties, the monitoring and verification teams have not investigated any reported violations.”

More people have been killed after the cessation of hostilities was signed than before, she noted, calling on the Council to support the initiative to deploy a protection force.

She recalled that the Council, in December, agreed to increase the number of peacekeepers serving with the UN Mission in South Sudan (UNMISS) from 7,700 to 13,200. However, the contributing countries have still not supplied some two thirds of the extra troops.

“The world’s youngest country has a long history of suffering. Its people look to this Council to exert its authority to ensure a speedy political solution to this dreadful conflict,” said Ms. Pillay. 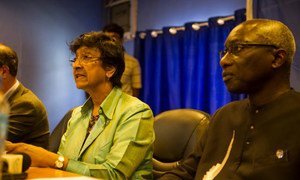 Warning that the world’s youngest nation is on the verge of catastrophe, the United Nations human rights chief today called on South Sudan’s leaders to relinquish their “personal power struggle” and steer their impoverished, war-battered country towards stability.