UN Photo/JC McIlwaine
Security Council meeting on 2 May 2014 on the situation in Ukraine. Jeffrey (left) Feltman, Under-Secretary-General for Political Affairs. Vitaly I. Churkin (right), Permanent Representative of the Russian Federation to the UN.
2 May 2014

As the United Nations Security Council convened its second urgent session this week on the situation in Ukraine, Secretary-General Ban Ki-moon reiterated his grave concern over the rising tensions in the country’s east and south, particularly events in the crisis-gripped city of Slovyansk, where two Ukrainian military helicopters were shot down overnight and a group of European observes captured on 26 April remains in detention.

Briefing the Council on the “severe deterioration” in Ukraine’s eastern and southern region, Jeffrey Feltman, Under Secretary-General for Political Affairs, read out a statement in which Mr. Ban said the escalating violence and reported further loss of life in Slovyansk, occupied by armed separatist insurgents since 12 April, ‘is a stark reminder of how dangerous the situation has become.’

The UN chief urged all sides to exercise “maximum restraint” and appealed to those with grievances to voice them peacefully, so as to avoid more bloodshed. The Secretary-General also called for all parties to respect fully Ukraine’s sovereignty and territorial integrity.

He also stressed that a diplomatic solution is the only way out of the crisis and that all sides “must redouble their efforts to revive the spirit of compromise displayed during the 17 April Geneva talks” between Ukraine, Russia, the United States and the European Union, at which an accord was reached on a series of steps to de-escalate tensions in eastern Ukraine, reportedly including demobilizing militias and vacating seized Government buildings.

In addition, the UN chief announced that Mr. Feltman will travel to Kyiv and Moscow next week. The Under-Secretary-General is expected to meet with senior officials and international partners to promote de-escalation and reiterate the Secretary-General’s strong message that ‘all actors need to exercise utmost caution to prevent the extremely fragile situation from spinning out of control.’

Meanwhile, Mr. Feltman filled in for the Security Council troubling details about the recent events, which he said “threaten a serious destabilization of the country and the region, as well as the unity of Ukraine itself.” In more than a dozen other cities in Donetsk Oblast and Luhansk, an increasing number of buildings are being held by armed groups.

As for the situation in the eastern city of Slovyansk, he explained that the city of 125,000 in Donetsk Oblast has been occupied by armed insurgents since 12 April. During the ongoing operations by the authorities, according to Ukraine's Ministry of Defense, two helicopters were shot down overnight with at least one pilot killed. A number of other casualties have also been reported on the ground, on both sides.

“The total cannot at this stage be completely verified. The acting Minister of Interior has stated that a number of road blocks have been removed from around the city, but from the media, we understand, that tense standoffs continue at least in parts of and around the city,” Mr. Feltman said.

At the same time, the seven military observers under the auspices of the Organization for Security and Cooperation in Europe (OSCE) and accompanying Ukrainian military staff being held by gunmen in Slovyansk remain in detention. To this end, he noted that Russian President Vladimir Putin has dispatched a Special Presidential Envoy to assist in the freeing of the hostages.

“I reiterate the Secretary-General's call to those responsible for their abduction to release them immediately, unconditionally and unharmed,” said Mr. Feltman.

The crisis, he said, has also escalated in the Donetsk Oblast and in Donetsk itself, where yesterday self-declared separatists had seized the regional prosecutor's office. “There have also been reports that the Ukrainian authorities have banned Russian passenger airplanes from flying to Donetsk and Kharkiv,” he said, adding that the UN had also seen reports of clashes during a pro-unity demonstration in the southern city of Odessa.

Against such a troubling backdrop, Mr. Feltman told the Council in closing that in his discussions with regional players next week, he will continue to reiterate the Secretary-General's message of restraint and immediate return to dialogue, including direct and constructive dialogue between Moscow and Kyiv. 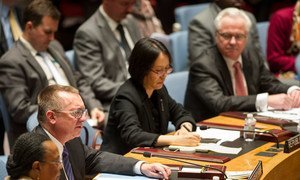 Describing “alarming” developments in Ukraine – from the capture of European observers and the violent takeover of Government buildings by separatist groups, to the shooting of the mayor of a major eastern city – a senior United Nations official this evening appealed to all sides to “work expeditiously” at putting the crisis-torn country on the path to stability.