UNAMI
Iraqi voters cast their ballots for the Council of Representatives, or legislature, in what was the country’s third national election under the 2005 Constitution.

1 May 2014
United Nations officials today congratulated the people and Government of Iraq for turning out in significant numbers in Wednesday's elections, and commended the electoral authorities and security personnel for their efforts.

In a statement issued by his spokesperson in New York, UN Secretary-General Ban Ki-moon applauded the determination of the Iraqi people and electoral officials “to strengthen the country's democratic processes.”

Mr. Ban encouraged patience while the ballots are being counted and complaints adjudicated.

“I congratulate all Iraqis who have shown incredible resilience by turning out in significant numbers on Election Day to vote. In some areas, this has meant long hours of waiting while enduring extremely difficult security challenges,” said Nickolay Mladenov, the Secretary-General's Special Representative and head of the UN Assistance Mission for Iraq (UNAMI).

“The commitment to democracy of the majority of people in this country; their readiness to brave harsh security challenges in order to build an inclusive state need to be applauded by all.”

Mr. Mladenov also commended the efforts made by the Independent High Electoral Commission (IHEC), as well as the dedication of security personnel across the country, for the elections, which he said were held in a professional manner and which are crucial to the country's democratic transition.

Yesterday, Iraqi voters cast their ballots for the Council of Representatives, or legislature, in what was the country's third national election under the 2005 Constitution. On the same day, voters in the Kurdistan Region went to the polls to choose their Governorate Council representatives.

The envoy noted that although in the lead up to Election Day, violence across Iraq had spiked, with polling stations, candidates and voters alike being targeted, large parts of the country reported few if any incidents on Wednesday. On the security side, the majority of incidents that have been reported were in Ninewa, Anbar, Salahadine, some areas around Baghdad, and Kirkuk in particular.

“The election process however is not over yet,” said Mr. Mladenov. “I want to use this opportunity to urge all to be patient and to give IHEC the necessary space to carry out through established procedures.

“I call on all political entities to refrain from such actions and statements that may influence IHEC. I call on them to direct any complaints to the appropriate IHEC offices, and to respect the final decisions.”

In a statement to the press, the UN Security Council yesterday welcomed the timely holding of the elections, and called on the country's leaders “to engage, as quickly as possible, to form a government that represents the will and sovereignty of the Iraqi people,” once the results are certified.

Concerned at bloodshed in Iraq, Annan calls for ceasefire 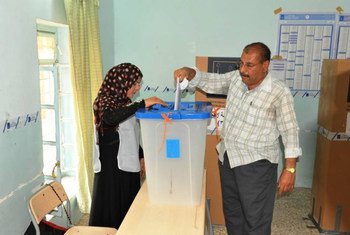 30 April 2014
The United Nations Security Council today welcomed the timely holding of parliamentary elections in Iraq, and, looking forward to the certification of the results by national electoral officials, called on the country’s leaders “to engage, as quickly as possible, to form a Government that represents the will and sovereignty of the Iraqi people.”