1 May 2014
The birthplace of jasmine tea and a nearly 3,000 year old irrigation system are among the traditional farming sites designated “globally important” land use systems or landscapes by the United Nations food and agricultural agency, it was announced today.

Globally Important Agricultural Heritage Systems (GIAHS) are considered “models of innovation, sustainability and adaptability, delivering important benefits to the ecosystem”, according to a news release from the UN Food and Agricultural Agency (FAO).

The new designations include Iran’s Qanat Irrigation system, an ancient network of farms that have survived for nearly three millennia; a 22-thousand-kilometer system of black stone walls built from volcanic rock in Jeju, Republic of Korea; and the traditional Gudeuljang Irrigated rice terraces in Cheongsando, Republic of Korea.

Also on the list are a trio of sites in China: the Xinghua Duotian Agrosystem famous for its method of water-land utilization; the historic Jasmine and Tea Culture System of Fuzhou City where the tea scenting method was first invented more than 1000 years ago; and, the Jiaxian Traditional Chinese Date Gardens recognized, as the place with the longest history of jujube cultivation.

The Rome-based FAO officially recognized the sites at the 28-29 April meeting of its GIAHS Scientific and Steering Committee.

These new designations bring the number of GIAHS systems to a total of 31 sites located in 14 countries in Africa, Latin America and Asia.

FAO’s Deputy Director for Natural Resources, Maria Helena Semedo, called for designation of more such sites around the world and concrete action to improve conservation of, and sharing of knowledge from, their time-honored methods.

These sites “have been forged over centuries, capitalizing on the accumulated experiences of rural communities and indigenous peoples across the world,” Ms. Semedo said, adding that it was fitting the systems were being recognized during the International Year of Family Farming.

“Besides providing multiple goods and services, food, and livelihoods security, GIAHS systems have resulted in the preservation of significant agro-biodiversity, resilient ecosystems, outstanding landscapes, and a valuable cultural heritage,” she said.

War against hunger, global warming can be won on farmlands &ndash; UN report 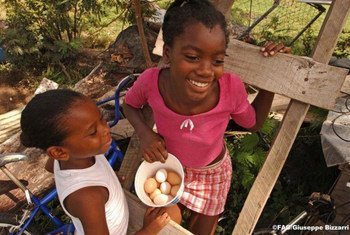