30 April 2014
Jazz has given rhythm to the struggles of civil rights movements around the world, the top United Nations cultural official said today, hailing the power of this music to bring together artists from different cultures and backgrounds as a driver of integration and mutual respect.

“Through jazz, millions of people have sung and still sing today their desire for freedom, tolerance and human dignity,” the Director-General of the UN Educational, Scientific and Cultural Organization (UNESCO) Irina Bokova, said in her message for International Jazz Day, celebrated each year on 30 April.

Born in the United States at the beginning of the 20th century, jazz is rooted in African traditions, draws from European musical forms, and has evolved into various styles across the globe. But as UNESCO Goodwill Ambassador Herbie Hancock puts it, “the roots of jazz are in humanity.”

“Music, and jazz in particular, is an international language that represents freedom because of its origin – growing out of slavery,” Mr. Hancock added in an interview with UNESCO.

This year’s celebration of jazz coincides with the 20th anniversary of UNESCO Slave Route Project, consecrated to the theme, “Assume the past, understand the present, build the future together.”

Since it was launched in Benin in 1994, the project has aimed to break the silence surrounding the slave trade and slavery, and contribute to a culture of peace.

“Music is such a beautiful way to tell stories. And in my mind, the stories we need to tell are the ones that depict the human struggle for dignity and equality,” said the Spokesperson for the Slave Route Project, UNESCO Artist for Peace and jazz musician, Marcus Miller.

The main event for this year’s International Jazz Day takes place in Osaka, which in the early 1920’s was considered “Japan’s jazz mecca”. Its key early figures in jazz include composer Hattori Ryoichi and trumpeter Nanri Fumio, who Louis Armstrong nicknamed the “Satchmo of Japan.”

“With its numerous jazz clubs and its world-renowned annual [jazz] competition, Osaka is the heart of the modern jazz movement,” Ms. Bokova said.

All events are organized with UNESCO’s ongoing partner for the Day, the Thelonious Monk Institute of Jazz.

“Each of the past two International Jazz Day celebrations reached more than one billion people through jazz performances, education and outreach programs, and media,” said Tom Carter, President of the Thelonious Monk Institute of Jazz. “This is a phenomenal figure and we believe even more people will participate in 2014.”

Coinciding with this year’s Day, the UN Postal Administration (UNPA) is issuing postage stamps and a souvenir card. Designed by UNPA Art Director Sergio Baradat, the stamps will be issued in United States dollars, Swiss francs and Euros.

To hear from jazz musicians about the Day, click here. 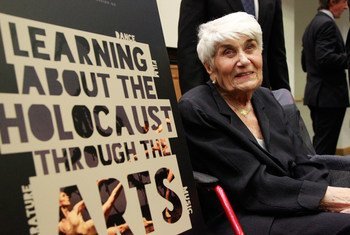 FEATURE: Music at UN event teaches about the Holocaust through victims' experiences

29 April 2014
From Adolf Hitler's rise to power in 1933 until the 1945 liberation, music played an integral role in daily life under Nazism, as illustrated at a United Nations event which used the medium of the arts to communicate fragments of the lives of victims of the Holocaust.