30 April 2014
Warning that the world’s youngest nation is on the verge of catastrophe, the United Nations human rights chief today called on South Sudan’s leaders to relinquish their “personal power struggle” and steer their impoverished, war-battered country towards stability.

“How much worse does it have to get before those who can bring this conflict to an end, especially President [Salva] Kiir and Dr. [Riek] Machar, decide to do so?” High Commissioner for Human Rights Navi Pillay asked at a news conference in the capital, Juba.

These comments come at the end of a three-day visit to the country by Ms. Pillay and UN Special Advisor on the Prevention of Genocide, Adama Dieng, amid the ongoing conflict between forces loyal to Mr. Kiir and Mr. Machar, the former vice-president.

“The deadly mix of recrimination, hate speech, and revenge killings that has developed relentlessly over the past four and a half months seems to be reaching boiling point, and I have been increasingly concerned that neither South Sudan’s political leaders nor the international community at large seem to perceive quite how dangerous the situation now is,” Ms. Pillay stated.

“Unfortunately, virtually everything I have seen or heard on this mission has reinforced the view that the country’s leaders, instead of seizing their chance to steer their impoverished and war-battered young nation to stability and greater prosperity, have instead embarked on a personal power struggle that has brought their people to the verge of catastrophe.”

The conflict, which began in mid-December 2013, is believed to have left thousands dead and forced tens of thousands to seek refuge at UN bases around the country. It has also been marked by numerous grave human rights violations.

The visit by the senior UN officials comes in the wake of mass killings earlier this month in Bentiu and Bor, which have “starkly underlined how close South Sudan is to calamity,” said the High Commissioner.

“The slaughter in Bentiu and Bor,” she added, “was simply the latest in a long list of similar tit-for-tat attacks in towns and villages in many parts of the country, which have increasingly involved armed Dinka and Nuer targeting each other’s civilian populations, as well as foreigners.”

The two officials held talks with both Mr. Kiir and Mr. Machar, during which they stressed the need for credible investigations in the killings and for accountability. “It is essential that the South Sudanese people and the international community impress on the country’s political leaders that they must stop blindly dragging their people down the path of self-destruction,” she stated.

Mr. Dieng said they reminded the President and the Government that the State has a primary responsibility to protect all South Sudanese, irrespective of their ethnic, national or political affiliation.

“Ethnicity should not be used as a reason to incite violence or demonise and exclude any community or section of the population. The world is watching. Those responsible for serious violations must be held accountable.”

In a phone call with Mr. Kiir yesterday, Secretary-General Ban Ki-moon called for an immediate halt to the vicious fighting and the appalling killing of South Sudanese civilians. He also stressed the need to ensure that the perpetrators of the “completely unacceptable” attack on the UN compound in Bor and the ethnically motivated killings in Bentiu are swiftly brought to justice.

With the rainy season just starting, the two human rights officials also urged the country’s leaders to show more concern both for the 1.2 million people displaced inside South Sudan, or in neighbouring countries, and the many other South Sudanese who are now in real danger of facing famine, because the conflict has meant that this planting season will almost certainly be missed with devastating results on the country’s food supplies.

Ms. Pillay said she was “appalled” by the apparent lack of concern about the risk of famine displayed by both leaders, when she raised the issue. The reaction to UN Humanitarian Coordinator Toby Lanzer’s call for 30 days of tranquility to allow people to go home to plant was “lukewarm,” she stated, noting that both leaders said they would if the other did, then made it clear they did not trust each other’s words.

“The prospect of widespread hunger and malnutrition being inflicted on hundreds of thousands of their people, because of their personal failure to resolve their differences peacefully did not appear to concern them very much,” Ms. Pillay lamented.

“If, in the very near future, there is no peace deal, no accountability, no space to rebuild trust and promote reconciliation, and insufficient funds to cope with a looming humanitarian disaster, I shudder to think where South Sudan is heading,” she stated.

“After so many decades of conflict and economic neglect, the South Sudanese deserve better than this, especially from their own leaders – but also from the international community, which has been slow to act.” 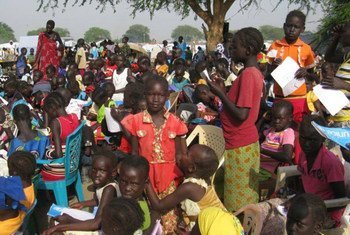 28 April 2014
The United Nations human rights chief today called on the parties to the conflict in South Sudan to respect the cessation of hostilities in order to stem the suffering of ordinary civilians and to ensure that it is safe enough for those uprooted by months of violence to return to their homes.