The head of the Organisation for the Prohibition of Chemical Weapons (OPCW) said today it will seek to “establish the facts” surrounding allegations of the use of chlorine in Syria, where it is already working jointly with the United Nations to rid the country of its chemical weapons.

According to media reports, opposition activists say the Syrian Government has attacked rebel-held areas with chlorine gas. The Government denies the claims.

OPCW Director-General Ahmet Üzümcü announced the creation of the fact-finding mission at a meeting of the body’s Executive Council held in The Hague.

The Syrian Government has agreed to accept the mission and will provide security in areas under its control, the OPCW said in a news release. The investigative team is expected to depart for Syria soon.

“The Secretary-General has expressed his support and assured the assistance of the United Nations in meeting the significant security and logistical demands of this mission,” UN spokesperson Stéphane Dujarric told reporters in New York.

Last week, the Joint Mission of the OPCW and the UN (OPCW-UN) said that 92.5 per cent of Syria’s chemical weapons material has been removed or destroyed in country, including all declared production, mixing and filling equipment and munitions, as well as some buildings associated with the country’s chemical weapons programme.

The deadline for the completion of this process is 30 June 2014, the date set by the OPCW Executive Council and the UN Security Council.

The alleged use of chlorine gas is just the latest development in the ongoing conflict, which has caused untold suffering for millions of civilians over the past three years.

♦ Receive daily updates directly in your inbox - Subscribe here to a topic.
♦ Download the UN News app for your iOS or Android devices.
chemical|syria 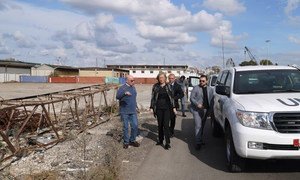 Nearly eight per cent of Syria's declared chemical weapons material remains on its territory and should be removed in the shortest possible timeframe, despite the difficult security situation, the head of the Joint Mission of the Organization for the Prohibition of Chemical Weapons and the United Nations today urged.