The United Nations refugee agency is preparing to airlift relief supplies to South Sudan today for 100,000 displaced people ahead of the rainy season, while the top UN relief official there is calling for a month-long truce to enable people to move around safely and cultivate their fields.

The blankets, sleeping mats, water buckets and other relief items being transported from Dubai to the South Sudanese capital of Juba will be distributed mainly in Unity, Upper Nile and Jonglei states, according to the UN High Commissioner for Refugees (UNHCR).

“Once the rainy season begins in earnest next month, roads in these areas will become impassable for weeks,” UNHCR spokesperson Fatoumata Lejeune told reporters in Geneva.

The operation is part of a wider effort by the agency to supply essential relief for many of the more than one million people displaced by the fighting in South Sudan over the last four months.

Within South Sudan, UNHCR is concerned about terrified civilians who have been left without basic household items because they have been forced to flee violence, often more than once. This leaves them exposed to the elements without the ability to keep warm, cook or maintain basic standards of hygiene.

Fighting has continued to take place in various parts of the country despite the signing of a cessation of hostilities agreement by the main parties to the conflict in January.

In total, 923,000 South Sudanese are displaced within their own country, while more than 293,000 people have become refugees in neighbouring countries since the crisis began in mid-December 2013. Some 4.9 million people need humanitarian assistance.

Meanwhile, UN Humanitarian Coordinator in South Sudan Toby Lanzer warned today that the conflict has put a “staggering” 7 million people at risk of food insecurity across the country.

“I call on all parties to the conflict in South Sudan to observe one month of tranquility this May; to stop the violence and to provide a safe environment for civilians caught by the conflict at this most crucial time of the year,” he said in a statement.

“The citizens of South Sudan have a right to move around their country whether to tend to their livestock or for other reasons, or even to seek asylum in neighbouring countries if they so wish. The conflict currently compromises their ability to do so,” said Mr. Lanzer.

“While the only way to reverse this crisis and its grave humanitarian consequences is to find a political resolution to the conflict, one month of tranquility this May is a tangible step that will have an immediate impact on the lives of millions of people.” 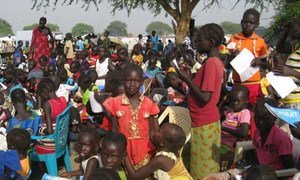 The United Nations human rights chief today called on the parties to the conflict in South Sudan to respect the cessation of hostilities in order to stem the suffering of ordinary civilians and to ensure that it is safe enough for those uprooted by months of violence to return to their homes.